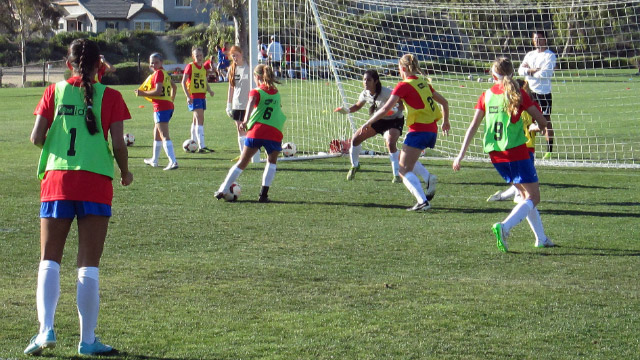 The US Club Soccer id2 Camp in Raleigh, NC continued on Saturday, with both the boys’ and girls’ sides training during the morning session and playing during the afternoon. After the initial two days of training sessions and matches, the camp staff divided the initial teams into more evenly divided squads. The two matches proved to be extremely entertaining, with the final match of the day barely dodging some heavy rain.

The first girls’ match of the day at the Raleigh id2 Camp on Saturday featured newly formed rosters, providing a very balanced and entertaining game. If the coaching staff was looking to balance the two teams, they accomplished their goal.  The Green and Yellow teams ended up sharing the spoils, with a final score of 1-1.

After the first 20 minutes resulted in a series of back and forth midfield play, it was the Yellow team who was able to find the net first. Yellow team Forward Madisyn Pilla found the ball at her feet about 30 yards away from goal and launched an arching strike into the back of the net.

As the half wore on, Yellow continued to maintain a majority of the possession and nearly doubled their lead with just moments remaining in the first half. Pilla was again involved in the play, finding an opening to cross a dangerous ball into midfielder Abby Smith. Despite good placement on the strike, the shot from Smith just didn’t have the power to beat the keeper and Yellow took the 1-0 lead into halftime.

The Green side came out determined to turn the tables in the second half and found the equalizing goal less than a minute into the half. Green team forward Catherine Barry was able to find the back of the net from 25 yards away after a failed clearance from the Yellow back line.  The sizzling strike was so unexpected that goalkeeper Kaitlyn Parks was unable to even make an attempted save.

Through dominant midfield play and a great display of possession, the Green team controlled a majority of the second half and easily outshot the Yellow team. Green team forward Riley Rose nearly found the game winning goal with just moments left to play, but her effort sailed just inches over the goal and the final whistle blew on the ensuing goal kick.

The second girls’ match of the day proved to be just as entertaining as the first, except with more goals. The two teams were again evenly matched and provided a chance for every player to show their skills, including Yellow team midfielder Julia Hannon and Green team forward Naomi Ferguson, who both scored two goals a piece during the match. Despite Ferguson’s efforts, Hannon went on to lead the Green team to a 3-2 victory.

Although the Green team went on to take the “W”, it was the Yellow team and Ferguson who struck first. Ten minutes into the first half, forward Naomi Ferguson linked onto a through ball from camp newbie and PDA player Laura Jackson. Goalkeeper Marzia Josephson made an attempt at the breakaway save, but arrived just a few milliseconds late to the ball.

Even being down a goal, the Green team continued to attack and threatened to equalize with five minutes to play in the first half. After a dangerous corner kick was whipped into the box, Yellow team keeper Cayla White made an impressive punch in traffic to keep her team ahead.

Unfortunately for White, the Green side launched another attack with just a minute left in the half and found the equalizing goal. Right-side forward Megan Nielsen found a few yards of space and looked to play what appeared to be a cross. Luckily for Nielsen and the Green team, the mishit ball turned into a phenomenal strike and found the back of the net to give them the last minute equalizer before half-time.

With threatening skies and rain moving into the area, the second half was played with much cooler temperatures. Fortunately for spectators, the game was just heating up.

Riding the momentum of their last minute goal in the first half, Green came out and dominated the first 10 minutes of the second half. Both outside backs were flooding forward into the attack and launched multiple dangerous crosses into the box.  Recognizing the Green team’s vulnerability at the back, the Yellow side began launching counter-attacks.

Just 12 minutes into the second half, the Yellow team was able to catch the Green back line on out of position on a counter and easily finished to take the lead. Ferguson’s second goal of the match came when she finished the 1v1 situation, set up by a through ball from defender Gracie Brian.

Hannon quickly responded and nearly took the lead back for the Green team minutes later when she linked onto a through ball. Josephson was again up to the task and made an impressive reaction save to keep the score even.

The Green team wasn’t done attacking yet though and continued to find Hannon up top. Again finding herself in front of the net, Hannon provided an opportunistic finish with just 2 minutes left in game. The slotted shot found it’s way past the keeper and into the left side netting, securing the 3-2 victory for the Green team.