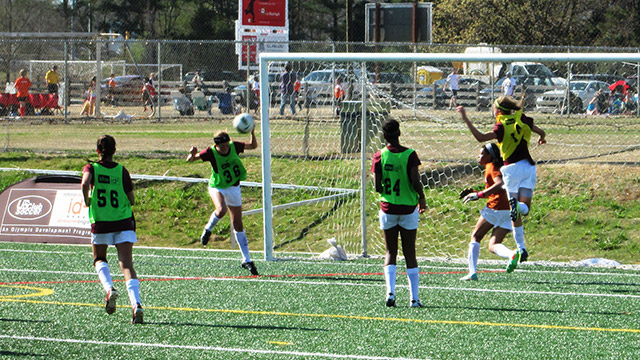 Raleigh, N.C. – The final day of the US Club Soccer id² Training Camp in Raleigh saw the boys feature in two games, while the girls had a recovery session following a tough few days of training and games. While the girls enjoyed some soccer tennis and a light atmosphere on Field One, the boys prepared for two final games on the adjacent Field Two.

On a brisk and windy morning at WRAL Soccer Center, the boys teams were changed for the final two matches. Starters for each of the games are listed below.

In the first boys game of the day, the game started going back and forth with small periods of possession. It seemed as though some nerves were the cause, but once everyone settled down after the first five minutes, the game went into more of a rhythm.

The scoring started in the seventh minute, when Team Yellow whipped in a corner kick. The initial header on goal was deflected and fell to the feet of Marcus Gabrielli, who put the ball in the back of the net from the penalty spot.

Just ten minutes later, a defensive mishap at the back for Team Yellow led to a Team Green goal to tie it up. Later, in the final minute of the first half, Nazar Tsaruk broke the deadlock with could have been the goal of the day. Tsaruk, who had made a run into the box, got a ball from the outside midfielder, took it down off of his chest with ease, touched it around a defender, and volleyed the ball in the corner of the net. Seconds later, the halftime whistle blew.

The second half was full of chances for both sides, but the goalkeepers both did their part, stopping numerous 1v1’s, and making diving saves to keep the score at 2-1. Team Yellow scored to make it 3-1 midway through the second half, and despite continued pressure to pull a goal back, Team Green was unable to break through. The final score was 3-1, and the players began to head home from places like New York, Texas, George and Massachusetts.

In the final game of id2 action in Raleigh, NC at WRAL Soccer Center, the group probably played the most attractive soccer of the whole weekend. Through the early parts of the game, extended periods of possession were traded back and forth between Team Green and Team Yellow.

The best chance of the half and what would have been the goal of the camp, came in the 18th minute when Christian Arcos blasted a shot from about 25 to 30 yards out. The keeper had no chance, but the ball rang off the crossbar and the score remained deadlocked.

Just seconds before halftime, Gabe Segal placed a great shot on target, but Burkhart came up with a great diving save to keep the score tied at 0-0 going into halftime.

As the second half began, Isaiah Reed was moved from left back to left midfield, a position where he could attack a bit more. That move and a more offensive-minded Team Yellow began to put the pressure on Team Green in search of the first goal of the game. Minutes into the second half, Arcos found himself alone with the keeper, but AJ Petrucci was quick to come off his line and clear the ball out of danger with his feet.

Later in the second half, with continual pressure, Kaveh Rad began to move with ease up the right flank. He whipped in several dangerous balls, but no one could finish. The best chance came when Rad found Reid at the back post wide open, but his header sailed wide of Petrucci’s net.

The relentless pressure finally broke the deadlock with just seconds remaining in the game after a deadly counter attack from Team Yellow. After making a save, Team Yellow goalkeeper distributed the ball to Reid, who shook off a defender and found a streaking Arcos behind the Team Green defense. With speed and composure, Arcos slipped the game winner in at the near post in a 1v1 with the goalkeeper.

The game wasn’t over, as Team Green had one final chance in the waning seconds. A shot and rebound went just wide and the score remained 1-0 until the final whistle.