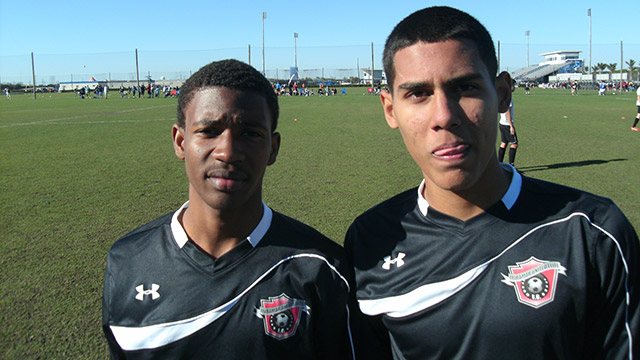 BRADENTON, Fla. – Here are some of the highlights from the first day of competition Friday at the IMG Cup – College Showcase, featuring 70 club soccer teams from around the United States.

Teams will also be back in action on Saturday and Sunday before the tournament concludes at the IMG Academy.

U14 - ODP 4, IMG 1: Vincent Manzo and Michael Ketteman scored two goals each as ODP players from around the country came together after only 75 minutes of practice with each other before Friday’s game.

Some of the ODP players still didn’t know each other’s names.

“What we focused on, first of all, was how we wanted to play,” said veteran ODP coach Steve Gummer, who resides in Atlanta. “We wanted to play the ball as quickly as possible with short passes.”

There are several ODP teams in the tournament playing in different age groups. The players are selected from at the USL Super-Y Summer League from all over the country. The players for this tournament were selected by opposing coaches. Those receiving the most votes made the team.

U17 – Plantation FC 2, Tallahassee United 2: Plantation held a 2-0 lead at halftime on the strength of goals by Gerardo Sarmiento and Jonathan Lewis. Sarmiento scored on a free kick in the second minute of the match.

Plantation coach Jim Sotter was disappointed his club could not hold the lead for the victory.

“We played solid defense in the second half, but we just didn’t put our chances away,” Sotter said. “That’s what happens when you don’t take advantage of your opportunities.”

“We played solid defense,” Thomas said. “But I can’t say we finished because we missed too many opportunities.”

U16: After being tied at 1-1 at halftime, Miramar United scored to take a 2-1 win over IMG Academy on IMG Academy Field, the main field at the huge athletic complex.

IMG coach Miguel Rodrigues was disappointed in the result, but thankful for the opportunity to play on the main stadium field.

“It’s a beautiful field on which to play,” Rodrigues said.

Other results – Also on Friday, VSI Pinellas of St. Petersburg, Fla., slipped past Orlando QPR, 3-2, in U17.