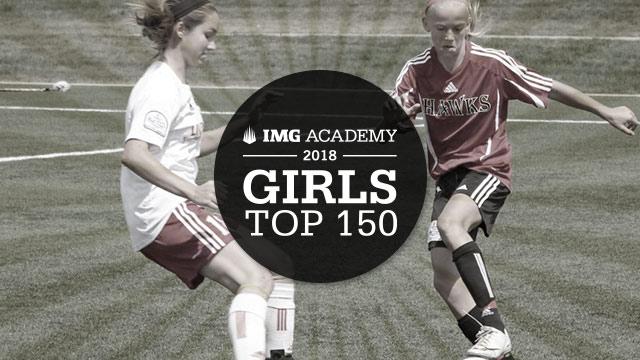 TopDrawerSoccer continues the updates to the IMG Academy Top 150 players list with the girls class of 2018 on Monday. The latest update reflects the new list for the Spring 2017 season. The latest update still has midfielder Brianna Pinto as the No. 1 play in the class.

U.S. Soccer darling Sophia Smith (Real Colorado) has moved up to No. 2 in the class. Smith has been busy with the youth national teams during 2017, and recently received her first look with the Women’s National Team. The talented forward could be in for a monster year at the club and international level. She figures to have a role with a multiple of youth national teams over the next few months.

Naomi Girma, Jaelin Howell, and Alexa Spaanstra round out the top five in the Spring Update for the IMG Academy Top 150 players for the class of 2018. The trio of youth national team standouts have been impressive for various reasons in the past and are the best in this class.

Jordan Brewster makes the big jump in this update. The Internationals SC forward was recently named to the U.S. U20 Women’s National Team roster for a camp in San Diego. Brewster has given her verbal commitment to West Virginia.

Brianna Atterbury (Sereno SC) also made a jump up the rankings with this update. She has been terrific at the club level in 2017, and is one player to watch for the rest of the season and for the future.

Washington Premier’s Taylor Smith makes a big leap in this update. The defender jumps into the rankings at No. 98 with this update. She is one of the top players in the Pacific Northwest. Smith was one of a number of new players to the rankings in this update. Check out the full list to see which players made the cut in the IMG Academy Top 150 Spring Update.