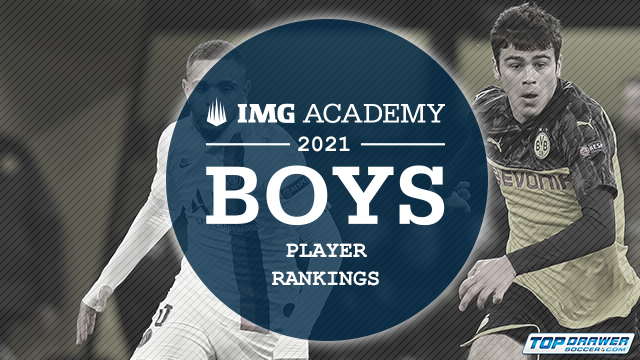 TopDrawerSoccer begins the updates to the Top Club Soccer Player Rankings, presented by IMG Academy, with the Boys Class of 2021. This is the final update for the class of 2021. With some players already on college campus and the vast majority of the top ranked players already in the professional game, they transition out of youth club soccer player rankings with this update. The class of 2025 will be added to the new updates starting in July. The next class updated for the Spring Update will be the Girls Class of 2021. The regional rankings for each class will be released on Thursday following the release of the national list.

Check out the TopDrawerSoccer Boys Club Soccer Top 150 Players, presented by IMG Academy, for the Class of 2021.

Borussia Dortmund star and U.S. Men’s National Team regular Giovanni Reyna goes first update to last update as the No. 1 player in the class. Reyna has been an obvious choice since his early days at the club level as a top prospect. His development over the years has only emphasized that point. Here is our scouting video on him from four years ago.

MLS regulars Caden Clark, Moses Nyeman, and Griffin Yow round out the top four for this class.

Jathan Juarez, Kieran Sargeant, Emmanuael Smalios, and Kevin Carmichael are among the new players added to the rankings during this update. More players will be added to the regional rankings update when it is released later this week.