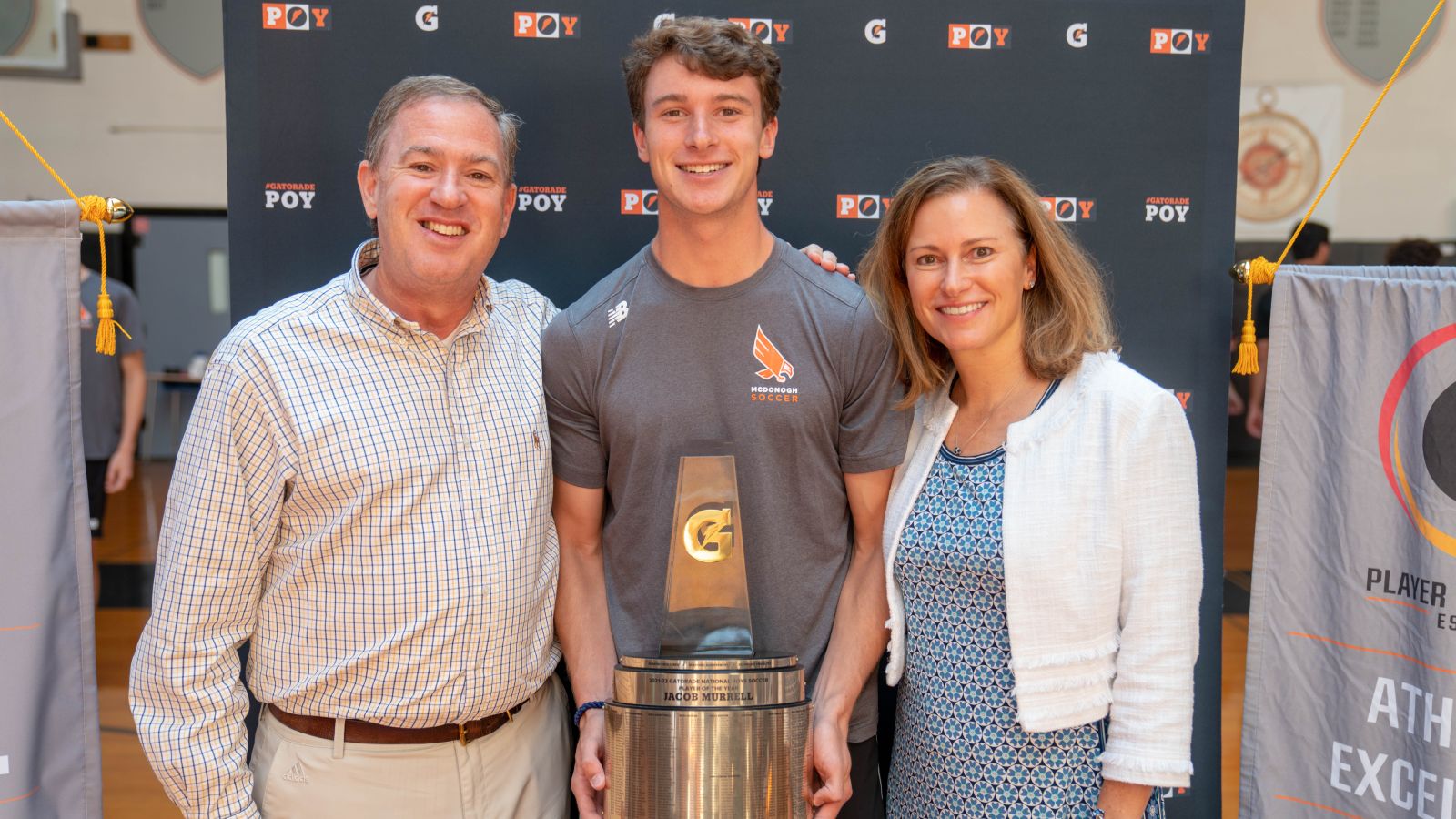 Jacob Murrell was being lied to. The McDonogh forward was told by his coach that he was being taken to his high school’s field for yet another photo shoot for the local paper. But a sharp turn put him into the school gym, one packed with friends, family and club teammates.

And amidst the crowd was a trophy, one for Gatorade National High School Player of the year. The ruse was up.

“It genuinely was the first time I think I've ever been taken away by something, just completely overwhelmed,” Murrell said.

The award capped off a glittering two years for the star forward. A solid youth career was buoyed by two prolific seasons to finish high school, and Murrell was crowned national high school player of the year Tuesday.

A prestigious trophy, it’s the latest in a string of accolades the Owings Mills, Maryland native has built up over the past few months. First, there was a Baltimore-Sun Metro All XI selection. Next, an All-American birth. And, then, Maryland state player of the year. After the awards started to rack up, the prospect of the biggest prize was a possibility — at least in the eyes of his coach Brandon Quaranta.

“Coach [Quaranta] told me I had a decent shot at [the award],” Murrell said. “And he's pretty upfront with me about everything”

Murrell certainly has the credentials to merit the award. After a promising start to his prep career was stalled by the Covid-19 pandemic, the forward hit his stride in the youth circuit upon his return to the pitch. By senior year, he was dominating high school ball. Murrell bagged 41 goals and added 20 assists in 2021-22. He scored in bunches, too, with four hat-tricks and four-foul goal games.

That level of play led to a commitment to play at Georgetown, where he will enroll as a freshman in the fall.

But the Hoyas weren’t sold on Murrell immediately. They saw Murrell play his last game before lockdown. He turned in a good performance, scoring twice. It was a game that caught the eye, but not one that sealed an offer — at least, not immediately.

Seven months later, though, they saw an entirely different player. Murrell used lockdown to improve his game. That meant time to fill out his 6-foot-2 inch frame, work on his touch and become a more dynamic forward. He trained three times per day, ran relentlessly and developed his technique in front of goal.

Upon his return to the field, Murrell was a consistent scoring threat. He was often stronger than the defenders he faced, but also had a burst of pace that made him even harder to mark. His finishing improved, too. Watch him now, and you’ll see a player that can shoot with either foot. For every left footed volley into the top corner, there’s also a right-footed, curling free kick, placed delicately past a sprawling keeper. There are also neat dribbles and close finishes, stepovers and sharp cuts.

So, when Georgetown saw the Maryland native in a scrimmage — one which his team won 8-3 — they took in a new version of Murrell. One that could dominate, one capable of posting the kind of numbers he produced. It was that player which spearheaded’s McDonough’s historic run to the Maryland Independent Athletic Association Class A state tournament championship game.

“I was just trying to do whatever I could to make the team better. And my role was to score goals. That doesn't make me any more important than anyone else on the team,” Murrell said.

There’s another side to Murrell, too. He’s an excellent student, holding a B+ average in high school. He’s put in hours volunteering for the Char Hope foundation, an organization in Maryland that helps adults struggling with substance abuse. He’s coached youth soccer when he has the time.

“You have to keep your grades good, and you have to support your community,” Murrell said. “That's really what's most important, being well rounded in life.”

It’s the holistic person that Georgetown gets this fall. He’s someone who has the pieces to follow names such as Claudio Reyna and Jack Harrison into the professional game. But he can also contribute to the university community.

On the pitch, though, Georgetown welcomes a prolific striker, a player physically strong and technically gifted. And one perhaps well-deserving of the highest honor of high school soccer.