A member of the Jamaican U17 World Cup qualifying roster, Malcolm Stewart has put in plenty of work on the field. When it came to searching for the right school, the defender of Jamaican descent also put in the work off the field. 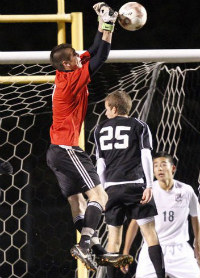 With recruiting stops at Maryland, High Point, Wake Forest, Xavier and Charlotte – to name just a few – the Charlotte side that reached the 2011 College Cup Final ultimately won out for a variety of reasons.

“I committed to Charlotte because it offered the best combination of high academic and soccer standards that I was searching for,” Stewart told TopDrawerSoccer.com. “The 49ers play in a very challenging conference, which will help in my development and aspirations to play soccer professionally. My overnight visit on campus was great and I liked the togetherness of the players. I also liked the fact that coach [Kevin] Langan played my position during his professional career, so I would be able to benefit directly from his experiences.”

Langan, who completed his first season in charge of the 49ers this fall, certainly helped convince Stewart that Charlotte is the right place for him. But it was more than just the coach, as the defender was also swayed by a positive experience during a visit to the school.

“I was able to watch the team play and win against the Charlotte Eagles USL team,” he said. “They played possession soccer at a rapid pace, which was fun to watch and reminded me of my Georgia United team. The coaching staff also seemed to have a really good rapport with the players and this was appealing to me. I had the chance to meet briefly with coach Kevin Langan and more extensively with assistant coach Kyle Gookins and liked their philosophy about the game and future plans for the program.”

Sam Bissett’s decision to commit to Davidson was just one of those situations where a college soccer hopeful found the right fit at the highest collegiate level.

“I decided to commit to Davidson because it is exactly what I am looking for in a college: a strong academic program combined with competitive Division I athletics,” he told TopDrawerSoccer.com. “I especially like the idea of attending a small college like Davidson where I will have the opportunity to really get to know my professors.”

Being from the same state as the program also didn’t hurt, as it helped educate Bissett about the program.

“Since I have grown up in North Carolina, I have always heard what a great school Davidson is, and they are regularly recognized for their strong teaching,” he said. “I also like the fact that 25% of the students are involved in athletics.”

Then, of course, there was Bissett immediately hitting it off with the goalkeeper coach, an important aspect every shot-stopper looks for when sifting through college destinations.

“When I attended their spring ID camp, I enjoyed working with Eric Reed, the goalkeeper coach, and think he will help me progress and reach my full potential as a ‘keeper,” Bissett said.

The Real Colorado Graham Smith had plenty of good things to say about his future collegiate home.

“I made my commitment to Oregon State for many reasons,” he told TopDrawerSoccer.com. “A few of which being the amazing campus and community in Corvallis, playing against the best opposition in the Pac-12, and the incredible education Oregon State can provide. When I went on my visit the coaches, Steve [Simmons] and Dustin [Norman], were very patient throughout the whole process. I was blown away by the athletic facilities as well.”

Defender Gabe Welp (Cincinnati United Premier) committed to Brown for the class of 2014.

Forward Said Elyas (Atlanta Spurs FC) committed to American for the class of 2015.

Defender Sam Tweeton (Real Colorado) committed to Oregon State for the class of 2014.

Forward Frantzdy Pierrot (Seacoast United) committed to Northeastern for the class of 2014.

Goalkeeper William Corcoran (Chargers SC) committed to Erskine for the class of 2013.

Midfielder Declan McCabe (New England Revolution) committed to Georgetown for the class of 2014.