Jerez could be locking residency spot 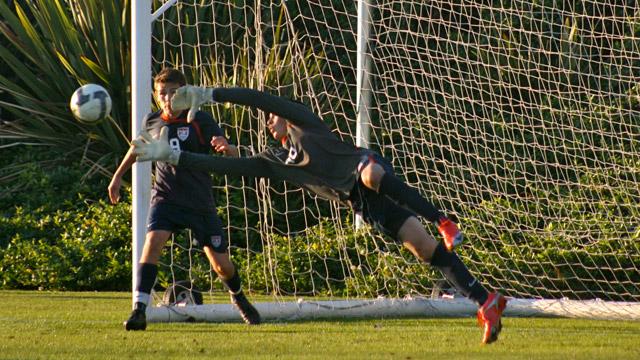 As his son entered the field for the second half of his game, Julio Jerez had a proud but nervous look on his face.

“This is the worst position they could have put him in. Vamos [Let’s go] Cesar,” he commented.

A former goalkeeper himself, Mr. Jerez knew exactly what his son was feeling. The U.S. U15 BNT was down 1-0 to Canada U15, and now it was his son’s job to not allow the Americans to sink into a deeper hole.

His son, Cesar Jerez, had been selected by the U.S. staff to be the closing goalkeeper in the U.S. U15 BNT training camp. Throughout that week, Cesar had demonstrated a great deal of talent among the goalkeepers. Earlier, he helped his team to a 2-1 victory over the Cosmos Academy West U16, the academy team he plays for regularly.

Julio Jerez makes a save at the U15 BNT camp.
“We couldn’t be happier for someone to be called into the national team camp,” Cosmos Academy West Head Coach Josh Henderson said.

He correlates Cesar’s success to his approach to the game.

“He always arrives 30 minutes early to practice and consistently does his routines to prepare himself mentally and physically,” Henderson said. “That attitude trickles down into his life at school and with his family.”

To put in perspective how important Cesar is to Cosmos West, during his absence the team allowed six goals in two Premier League game defeats. Previously, the team had only lost once in its first eight games.

“He is a great presence for us and his communication is very good,” Henderson said. “He’s a great shot stopper but the best thing about him is his distribution, which is rare to see at Cosmos for a keeper.”

All his attributes were on display during national team camp, but none more than his distribution, as Henderson pointed out.

Cesar had strong punts, hitting the target forwards on the offensive third of the field. His talent of starting the attack so far up the field caused trouble for the other two teams he faced during the week.

However he’d never matched up against the Canadians, the team that crushed the U.S. a couple of day’s prior with a 3-1 margin, and were up on the Americans again.

As the second half progressed, Cesar did a great job holding his own inside his 18-yard box.

As he cleared balls, blocked shots, and snatch crosses from mid-air, his father grimaced and cheered alongside him, whispering all the advice he knew to his son.

“Be secure with the ball. No bounce son, no bounce.”

As the U.S. inched closer to the tying goal and eventual 2-1 game-winner, Cesar’s job between the pipes grew more important. However, the pressure didn’t seem to faze the youngster who continued being a wall at goal.

His most pivotal save came in the middle of the second half when the Canadian striker blasted the ball from inside the 18-yard box into the opposite post, where Cesar took off horizontal and grasped the ball in mid air. Strong and Secure.

“Wow!” his father exclaimed. “Did you see that? He stretched all he could for that one.”

The save was a clear example of why the U.S. staff had enough confidence to put Cesar in the game with so much pressure. Yet, even with a great showing there are things to improve in Cesar’s game if he wants a shot at a U.S. Residency Roster slot.

“His experience playing with the best players around the country gave him an idea where he needed to improve on,” Henderson said. “His weakness was handling crosses, so he’ll lean on the goalkeeping coach to continually analyze how and where he can get better.  We hope he moves forward into residency.”

Until then, Cesar will enjoy the honor he received by going to camp, and apply what he learned to improve and help his club team.

“He was really overjoyed with the experience he got,” Henderson said. “He is a great kid and his father is always there. It’s one of those stories that couldn’t happen to anyone better than him.”

Cesar was one of three Cosmos players to be selected with Adonis Amaya, and Bradford Jamieson. All three had a chance to play alongside players like Corey Baird, Emerson Hyndman, and Wilfred Williams.
Related: Players To Watch,