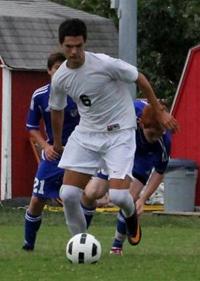 Kentucky teenager Nedin Zukanovic is currently on trial with FC Groningen of the Eredivisie, the highest professional level of soccer in the Netherlands. The trial was setup by International PRO Management, a company designed to help players get the best opportunities from experiences in Europe and specifically the Netherlands.

FC Groningen finished seventh in the table last season in the Eredivisie. Fellow U.S.-trained teenager Christian Rodriguez was a member of the youth academy for the Dutch club for a spell.

Zukanovic, a 19-year-old forward, enjoyed a very successful high school career, which included 98 career goals and four-time honors on the all-state first team.  The 6-1 striker is the all time leading scorer in Greenwood High School history.

The exploits on the Kentucky fields led to interest from Louisville, Kentucky, Cincinnati, Indiana, and Creighton among the collegiate ranks but the striker is exploring options in Europe first.

The teenager has also gained the interest on the international level as the Bosnia and Herzegovina U19 Men’s National Team called him in for a camp in Munich Germany.

Ethan Horvath’s journey from the club game to the professional game took a lot of sacrifices. Horvath, determined to make it in Europe, has been training with clubs for the past few years hoping to latch on with a team. His stops include Stoke City and Bristol City where he showed well, but did not have the necessary paperwork to make either move permanent.

Next month, that dream will become a reality, as the teenager will sign a professional contract with Molde FK when the transfer window opens, according to reports out of Norway last week.

Horvath, a 6-4 giant in the net, is likely going to contend for the starting spot with the U.S. U20 MNT during the 2015 World Cup cycle. He has regularly featured alongside Zackary Steffen with the current U18 MNT.

The goalkeeper from Colorado is the fourth player to join the Norweigan squad. He joins Joshua Gatt, Sean Cunningham, and Ben Spencer at the 2012 Tippeligaen, Norway’s top division, champions.

South Florida left back (and one of the top defenders in college soccer) Ben Sweat left for a three-week training stint in Czech Republic and Sweden on Monday, as reported by the Reading Eagle.

Sweat will train with Djurgardens IF and a team in the top flight of the Czech Republic domestic league.

The defender is just one of many collegiate players who use the summer months to check out the level of play of various leagues in Europe.

The list goes on, but this is a period that most top collegiate players take advantage of to show quality to potential employers when their eligibility runs out.