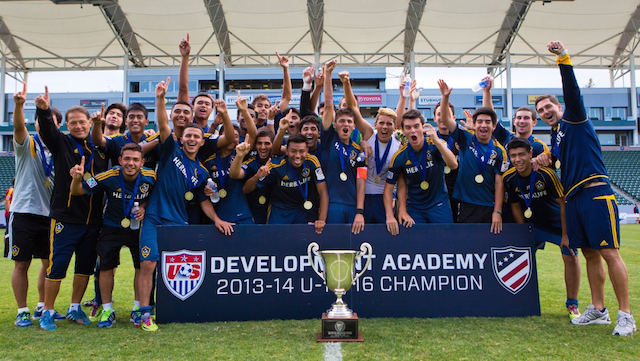 The Los Angeles Galaxy Academy is taking a big step forward in player development next month. The Galaxy is set to launch a high school program for the players in the Academy at the StubHub Center, a source told TopDrawerSoccer. The MLS club informed parents of the move recently.

This move will allow LA Galaxy youth players to train in the morning before going to class. Previously, players had been enrolled at various schools across Southern California.

None of the Galaxy players competed at the scholastic level though. The U.S. Soccer Development Academy, which the LA Galaxy Academy competes in at the U14, U16, and U18 levels, moved to a 10-month schedule for Southern California clubs in 2011, which prevented players from participating in both scholastic and club sports.

The StubHub Center, which is on the campus of Cal State Dominguez Hills, will be the base of the high school for the players and also where the Galaxy youth teams will continue to train.

The holistic approach will bring player development under one umbrella for LA Galaxy. A move similar to Real Salt Lake, Philadelphia Union, and D.C. United’s residential academies where the players live, train, and go to school together.

While one of Galaxy’s top prospects, Zico Bailey, is not from the area, the source gave no indication that Galaxy would head in that direction. Meanwhile, Western Conference rival Seattle Sounders is opening the door to those opportunities with 10 out-of-state players being invited into the Sounders Academy for the 2015-2016 season.

The high school program will make it easier on the players to come from near or far. With the centralized approach, the Galaxy Academy will rival and surpass that of Mexican academies, which have been active in trying to poach players from the area in the past.

Prior to the high school program news, Galaxy Academy coaches had been confident in slowing, or even stopping, that pipeline to Club Tijuana and other Mexican clubs thanks to the addition of Galaxy II and the ability to sign youth players to contracts with the reserve team, which plays in USL.

Current U.S. U17 Men’s National Team and LA Galaxy U16 goalkeeper Eric Lopez signed with Galaxy II in November. He was the second player to follow that path. Lopez still features with the Galaxy’s academy teams.

Galaxy’s addition of a high school program is also monumental from the youth national team perspective. Galaxy was expected to have more than 10 players in consideration for the U.S. U17 Men’s National Team Residency Program for the 2017 World Cup cycle. This move could help encourage U.S. Soccer to leave those national team players with their club instead of sending them to IMG Academy in Bradenton, Florida. USSF renewed their lease with IMG Academy in February for another two-year cycle at the grounds that Landon Donovan built.

Over 10 players on one youth national team is an unheard of figure, but it is definitely in the conversation for LA Galaxy. After Chivas USA ceased operations in October, LA Galaxy was granted full control of the Southern California youth soccer scene from an MLS Academy perspective. It did not take long for Galaxy to benefit from the monopoly.

Chivas USA (and former Barcelona USA) U14 coach Brian Kleiban inked a deal with LA Galaxy earlier this year as one of the coaches for the Galaxy’s academy next season. Kleiban, an already accomplished youth coach, comes with a number of promising prospects from his U14 team, which will add to an already deep roster Galaxy had in that age group. Kleiban joins Mike Munoz, the 2011 Development Academy Coach of the Year, on the Galaxy youth staff.

The high school, which will begin in August, is another example in LA Galaxy’s commitment to rivaling the best academies in the world. With loaded rosters and now a hub for everything Academy players need, Galaxy is entering into a frontier for player development in the U.S.