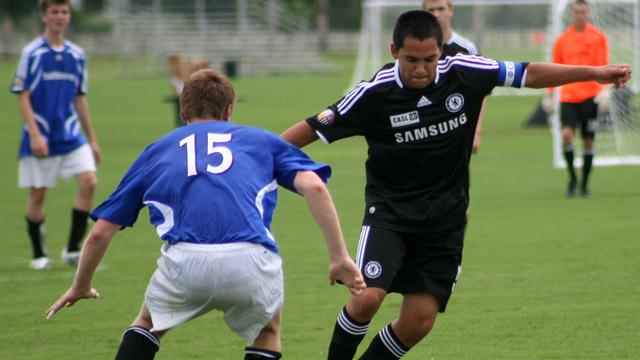 FRISCO, TEXAS - Some of the biggest drama was saved for the very end at the U.S. Soccer Development Academy Playoffs.

Group 8 of the U16 age group featured a match between Raleigh-area club CASL Chelsea and St. Louis Scott Gallagher. Both teams entered the day on 6 points from two matches and had an identical goal difference, meaning a draw would send them both to a unique kicks from the spot playoff to determine the final qualifier for nationals next month in Milwaukee.

That’s exactly what looked ready to happen with just a few minutes to go. Both teams, especially CASL had some good scoring chances during the match, but nobody had broken through. As players dug deep down for some extra energy in what was their third match in four days of sweltering conditions, it was clear something special would be needed to win the match in regulation.

Something Special’s given name is Fernando Castellanos, and he fired CASL into the finals with an excellent goal in the closing minutes, making a mazy run from the left before finishing from close range to touch off a wild celebration with his teammates and the U18 CASL squad who were also watching at Pizza Hut Park.

Other strong performers on the day for CASL were the tough-tackling Andrew Barber, aggressive forward Yanni Hachem and talented midfielder Alexander Olofson.

For Gallagher, goalkeeper Connor Sparrow made some excellent, athletic saves. Midfielder Jason Hackett was good on the ball and forward Nick Jones also looked dangerous. Brian Hail came on as a substitute at left wing, but looked to be one of the best players on the park with tough tackling and good decision-making with the ball.

Here’s what CASL coach Carlos Somoano had to say about the match and the Academy in general.

In another match, FC DELCO defeated Dallas club Solar Chelsea 2-1 behind a late PK save from Zackary Steffen. The team fell short of group rivals Real So Cal for the berth in the national finals, but Steffen was able to take something positive from his experience.

The other teams advancing to next month’s event in Milwaukee along with Real So Cal and CASL are Seattle Sounders, LA Galaxy, North Carolina Fusion, PA Classics, Real Salt Lake AZ and Dallas Texans.

Special thanks to Elizabeth Sanchez and the staff at U.S. Soccer for their help in covering the event.