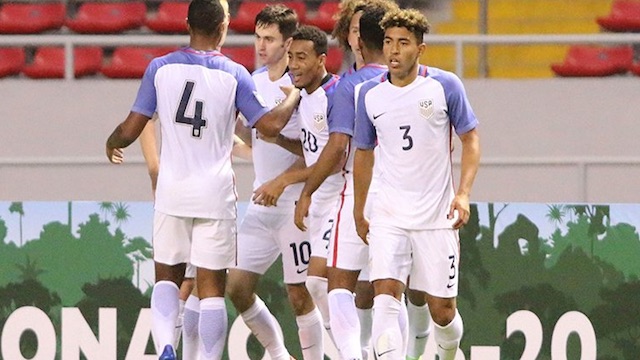 At least from an American perspective, the first 50 minutes of its matchup against Haiti on Tuesday was forgettable, to say the least.

The last 40? A different story entirely.

Three days after a shocking defeat against Panama, the U.S. weathered an early Haitian goal and ran away with the match in the second half en route to a deserved 4-1 victory in the U20 CONCACAF Championship in Costa Rica. Real Salt Lake right winger Brooks Lennon led the line for the Americans with a hat trick - including a penalty that tied the game in the first half - and Luca de la Torre added the other in a must-win for the U.S. A loss to Haiti would’ve eliminated them in humiliating fashion with a group match to go.

The win puts the U.S. on a clear, relatively breezy pathway to the final qualification stage. On Friday, the U.S. tangles with St. Kitts & Nevis, which lost each of its first two group matches and enters the matchup already eliminated from qualifying. A win in that match or a draw combined with a Haiti loss to group leaders Panama sends the U.S. through to its final group qualifying phase as the No. 2 finisher in the group.

And like all World Cup qualifiers, this one is ultimately graded on pass-fail, even if the U.S. has lacked for style points now for two successive matches.

The U.S. was deservedly beaten by a 10-man Panama side in the opener, and Haiti didn’t wait long to prolong the misery in the follow-up. Just 15 minutes in, Kenley Dede snuck inside right back Marlon Fossey - the second time his marker slid in for a goal in this tournament - and swung through meekly on a half-volley toward the far post. Keeper Jonathan Klinsmann didn’t react quickly enough and suddenly the shell-shocked Americans trailed 1-0 just 75 minutes from elimination.

The Americans finally hit back in the 28th through a lovely bit of ingenuity from newly installed left winger and recent NYCFC draftee Jonathan Lewis. The former Akron man replaced the Sebastian Saucedo/Emmanuel Sabbi rotation from the Panama match and was largely the U.S.’s most dangerous threat in the attacking third. In the 28th minute, he snuck inside his marker and into the box, where he was scythed down to earn a penalty Lennon hit to draw level.

The U.S. ultimately buried Haiti with quick-fire goals in the 52nd, 53rd and 58th minutes from de la Torre and Lennon to put the match on ice. De la Torre beat an out-of-position keeper begging for a foul that never came, while Lennon hit once on a bang-bang sequence in the box and again off a rebound.

After the Panama loss, U.S. coach Tab Ramos made two changes to his starting group: he yanked out Sebastian Saucedo, who was underwhelming in two positions in the opener, and compensated for the loss of central midfielder Tyler Adams, who was ruled out with an ankle injury. Maryland’s Eryk Williamson started in the middle and Lewis came in for Saucedo, and the latter move certainly paid dividends. But the former failed to resurrect what’s otherwise been a limp, listless central midfield desperately lacking for cohesion.

Ramos again trotted out the 4-3-3, essentially with center back Erik Palmer-Brown sitting deep as the No. 6 with Williamson and de la Torre roving in front, the latter as a pseudo-No. 10. But it failed to produce anything approaching a cohesive style, with the U.S. relying on second balls, deeply hit moon shots over the top and quick chances generated by the team’s high line through the back.

In reality, this is what to expect from Ramos, who’s used this style in different formational clothes throughout the entirety of his tenure with the U20s stretching back to the 2013 cycle. Ramos, who switches formations to suit his particular roster at any given time, invariably presses his back lines and midfielders and looks to quickly turn over possession and then ram it into the box as quickly as possible.

That’s precisely what happened on half of the U.S.’s goals against Haiti, both deposited by the lightning-quick Lennon. The other two were off a penalty and a keeper error off a corner kick. It was hardly jogo bonito, but it was certainly more effective than it was against Panama.

This, though, more completely embodied the type of soccer Ramos prefers, whether it draws rave reviews or not. The U.S. tends to break apart in the attack when it leans on more than six or seven passes in a row, so it tends to value rapid-fire breaks and quick-twitch attacks to minimize its time on ball. Despite another lackluster distributive day from Palmer-Brown (although the natural center back was again robust defensively), the U.S. was able to pressure Haiti and keep its shape well enough to push rapid opportunities into the box in heavier volume. While center forward Jeremy Ebobisse’s struggles to finish continued, he was lifted by the performances of his pinching wide players in Lewis and Lennon.

The U.S. has one more to go before assuring itself a spot in the final group phase, where it must finish in the top two of three teams. Until then, the fine-tuning continues.