The 2013 id2 National Selection International Tour wrapped up its trip to Spain last Sunday with a 6-1 win over Girona Infantil A. The result left the 2013 id2 team with a 2-2 record from the trip across the Atlantic, which is a respectable outcome considering games against Real Madrid and Barcelona’s youth teams highlighted the expedition.

However, following on the heels of the 2012 tour, which saw the U.S. contingent of youngsters top Barcelona, the results did not have the same pizzazz. Although, the players may have impressed scouts even more with this trip.

Relying on the possession, high-pressure style that Hugo Perez has so boldly championed with the U.S. U14 Boys National Team, the 2013 id2 National Selection implemented a similar game plan in Spain according to the players. 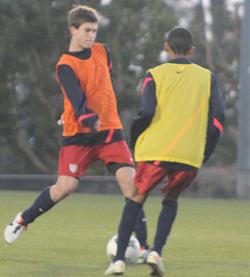 “We kept playing our style,” Kyle Gruno told TopDrawerSoccer.com. “Building out of the back, playing possession, we played really well. It was a couple of mistakes [that led to the goals] but that is going to happen. They had a hard time playing against us.”

Gruno, alongside Tyler Adams, anchored the center of the defense for the tour, as they do with the U14 BNT.

Nick Taitague, the attacking center midfielder with the side, made similar comments about the play.

“I thought we did well,” he said to TopDrawerSoccer.com. “We moved the ball well, but we needed to finish our chances better. We might have been a little nervous against Real Madrid and Barcelona.”

Taitague scored the opener against Madrid, which he called his favorite moment on the trip from the games. The id2 squad had a 2-0 lead in that game before falling 4-2 to Real Madrid.

In id2’s other loss, Barcelona had a 2-0 lead before Edwin Lara cut the lead to 2-1. The id2 squad had a number of other chances but could not find the game-tying goal.

Away from the games, both Taitague and Gruno cited the La Liga clash between FC Barcelona vs Deportivo de La Coruna as their best memory from the trip.

A handful of players from the tour impressed some of the scouts in attendance, which could open up some opportunities in Europe in the future.

Gruno said that he was informed after the trip that Liverpool had asked about him and then invited him on trial. The tall center back goes on trial for 10 days starting on April 4 with the Reds. Gruno has previously been on trial with Aston Villa, where he has impressed as well.

Taitague heard from the tour’s assistant coach Ben Ziemer that Real Madrid wanted to bring him and a few other players from the tour back to Spain for a trial later this year.

Beyond the trials, the core players from this tour will likely be part of the U14 BNT trip to Croatia next month, which is the first international trip with the national team for this age group.

Region I ODP heads to Italy

The US Youth Soccer Region I Olympic Development Program is headed to Italy next week for a tournament against some of the top youth academies from Northern Italy. Region I ODP ’97 boys will be playing against Chievo Verona, ACF Fiorentina, Atalanta BC, and AC Prato at the VII Trofeo Anselmo Fagni.

The placement matches from the tournament will be help on April 1.