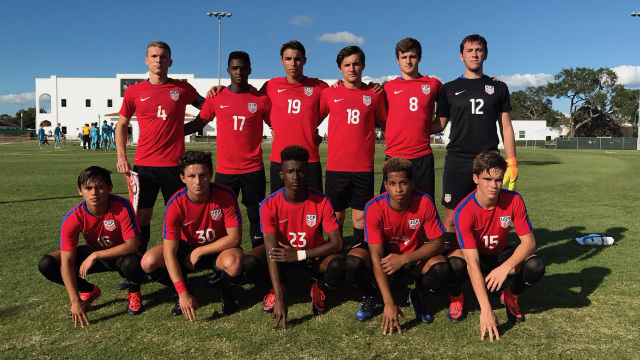 MONTVERDE, Fla. – Tonny Temple created space with a slight touch to his left, then slotted a left-footed shot into the side netting, which lifted the U.S. Under-17 National Team to a 1-0 win over Feyenoord’s U18 side on Thursday at Bishops Gate Field.

The three points earned keeps the U.S. (1-0-1) in the running for the inaugural Montverde Academy Soccer Tournament International Bracket title. The U.S. faces host SIMA (2-0) on Saturday. SIMA defeated Flamengo (Brazil) 1-0 on a Shelove Achelus goal. Flamengo (0-1-1) plays Feyenoord (0-2) on Saturday. All matches will be live streamed at WATCH LIVE.

U.S. coach John Hackworth was pleased with some of the second-half combination work, including the play leading to Temple’s goal. But he called the performance, otherwise, a so-so outing.

"I don't think we played up to our potential," Hackworth said. "I was frustrated with some of the decision making. We forced things, and made silly decisions. But this is a new semester. This group needs these kinds of games and 90-minute matches. … This was a good challenge."

Feyenoord tended to drop back on defense, and instead of taking that space, US players were forcing passes forward. At times, on defense, the US played short balls to the wrong side of players that led to turnovers and dangerous situations. Still, the US keeper tandem of Alexander Budnik (first half) and Quantrell Jones (second half) kept Feyenoord scoreless.

Temple’s game-winner came in the 50th minute. Early in the match he had an open chance on goal that was snuffed out by Feyenoord keeper Elber Evora, who made an athletic stop.