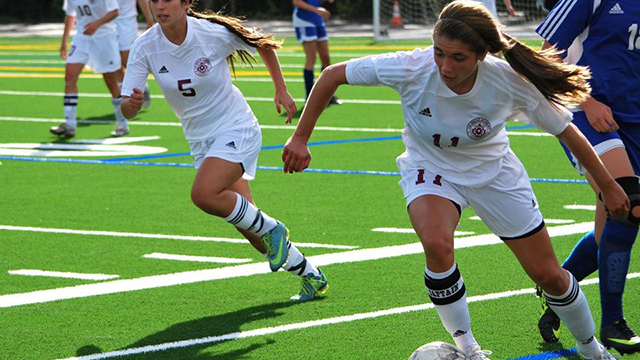 It’s been quite the year for McKenzie Meehan.

There’s no other way to put it – the high-flying forward has found the back of the net at an astounding rate during the 2011-12 ECNL season. 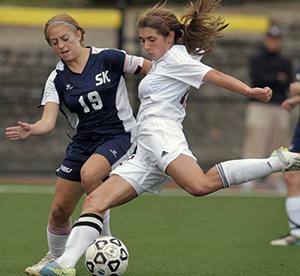 Meehan, who is bound for ACC powerhouse Boston College in the fall, has put up prolific numbers for her Scorpions SC U17 team this year. Through 20 games, she’s scored 44 goals in ECNL action.

“I think she’s always been a goal scorer,” Scorpions SC U17 head coach Keith Caldwell told TopDrawerSoccer.com. “But this year’s she’s taken it to a different level. The (number of) chances that she’s created for herself per game is just unbelievable, and her finishing rate about that is great.

“She strikes a ball with both feet, she’s creative around the box, finds ways to get shots off, is powerful, strong, she’s fast. She’s learning how to combine and get in behind people as well, she’s getting better and better with every game.”

In May alone, she’s scored 19 goals in six games. She attributes a lot of her success to her teammate.

“Our entire Scorpions team has been playing very well, and my teammates have created numerous scoring chances,” Meehan wrote TopDrawerSoccer.com an in email. “Everyone has been combining well and making great passes, so the goals come as a result of this. In addition, I have been making every effort to take advantage of the opportunities I have around the goal.”

And it’s all come as no surprise to Caldwell, who has always viewed her as a natural finisher, to see her improvement produce ridiculous numbers over the past few months.

“She’s become even better with two feet,” he said. “She’s become better in the air, her ball striking is been better, she’s learned different ways to finishing – bending a ball instead of just striking it with power, when to dribble the goalie one-v-one, when to slot it by the goalkeeper, so I think as she matures and as we work on it in training, she is becoming more creative in terms of ways to finish inside the penalty box.”

Added Meehan: “I feel that my shot has become more powerful and accurate, and I have improved my left foot. Also, I have improved on playing with my back to the goal as well as getting shots off as quickly as possible.”

There’s a unique wrinkle to all of McKenzie’s success at both the club and high school level. She shares the field with her twin sister, Maddie, who will play with her at Boston College in the fall.

It not only gives McKenzie a familiar face on the team, as the two have been teammates for a long time, but it also serves as motivation to keep improving..

“We've been on the same team ever since we started playing soccer, so we are very familiar with each other's style of play,” McKenzie said. “Therefore, we play really well with each other, and can rely on each other at all times. Maddie is a very smart, consistent player, and we are constantly pushing each other.”

McKenzie’s play in the last few months has earned national recognition, as she earned a call up to the U.S. U18 Women’s National Team for a camp at the beginning of June.

“I’m absolutely thrilled that she [was called up] because she deserved it one hundred percent,” Caldwell said. “She deserves to be in the team, I think she’s going to go there and do well and never look back…Nobody in the country deserves a shot more than her.”

The goal scoring has been at the same prolific rate for her high school team at La Salle Academy in Rhode Island. In guiding her side to a 20-0-2 record, Meehan scored 80 goals and had 14 assists en route to a state championship – the most goals scored in the nation (her sister Madison led the nation with 44 assists to boot).

The breakdown is even more staggering – she scored 16 hat tricks in 22 high school games last fall, as she was the same unstoppable force she is for her Scorpions side. That total brought her high school career goal tally to a whopping 180 in her four years.

This coming fall is going to present a new challenge for McKenzie as she departs for Boston College and another level. Caldwell thinks it’ll be no problem for her.

“I think when she’s playing next year at Boston College in the ACC, I think her continuing to get better at combining to get in behind people is going to be important for her at the next level,” he said. “She’s doing a good job with it now and she’ll just keep getting better at it, but I think when she’s playing in the ACC next year, every defender she goes against is going to be big time, a national team-type level kid.”

And not only does Caldwell think it won’t be that difficult, he is a firm believer that she’ll step in and succeed right away.

However, there’s still unfinished business for the Scorpions and McKenzie before that challenge starts. The club is still in the hunt for a national title in the ECNL. This past weekend, the Scorpions picked up a win and a draw in a tough away swing down in New Jersey that saw her score five more goals.

The decisive weekend is looming Memorial Day showcase, as the three games scheduled for the Scorpions is set to determine the club’s chances to make the National Finals. Caldwell is hoping to see more of the same from his rising star as the season winds down.

“I think she just needs to keep doing what she’s doing, keep scoring goals, and I hope she just keeps this form going through the rest of the year,” he said.

“Everybody we play knows who she is, so she has to deal with that extra attention, but I think she’s been doing that for a while, she’ll cope with that fine, I just want to see her get better every game.”