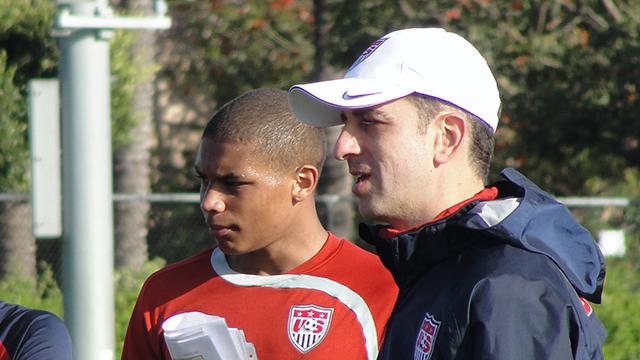 CARSON, Calif. -- Who is Javier Perez?

That is the question many U.S. Soccer fans asked when the federation named the Spaniard the U18 Men’s National Team head coach in February.

At only 34 years of age, he is the youngest head coach among the current group in the youth national team program.

Perez’s history and background though belies the fears of naïveté.

He already has a Ph.D in Exercise Physiology, a UEFA PRO license from Royal Spanish Football Federation – one of three coaches in Spain to have both honors, and studied at some of the top clubs across Europe.

How did a young coach with that pedigree arrive in the fold of U.S. Soccer? 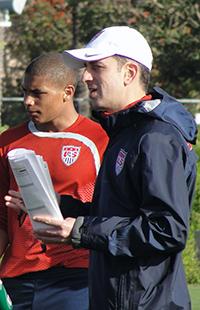 Javier Perez
“He is a very special person,” Perez told TopDrawerSoccer.com about his friendship with the U.S. Youth Technical Director. “We met through a mutual friend when I was in London. We connected instantly because we see soccer in a similar way, but we approach it from a different perspective – he has the vision of a professional player and I have the vision of a coach.”

Perez started coaching when he was 24 years old, and he quickly rose through the ranks in Spain.

“When I was working with Real Madrid, I had the opportunity to start working with the Spanish Federation,” Perez said. “I had the chance to learn from the top of the soccer world in Spain. Through all these years, I have been building this knowledge and experience coaching.”

Over the course of the last decade, he spent six years with Real Madrid’s youth academy, a couple in London studying different styles of play from clubs likes Chelsea, Inter, and Ajax, and a few starting the New York Soccer Club with Reyna in 2009.

“After Claudio retired, he was looking at how to make a difference in youth soccer in his country and he had this idea about starting a club in New York,” Perez said about partnering with Reyna to start a club. “He had the idea to start something special – with his experience of the U.S. soccer landscape and my knowledge of European clubs and coaching – but it was short-lived as U.S. Soccer immediately hired him as the Youth Technical Director.”

Perez remained the Director of Coaching at the New York Soccer Club after Reyna left, a position that Perez still holds today.

It would not be long before their paths would intertwine again, as Perez co-wrote the U.S. Soccer coaching curriculum, which Reyna unveiled last April.

And now, Perez finds himself once again working alongside his friend.

“The challenge is very big, and I am glad I have Claudio guiding the whole process,” Perez said about the job as a youth national team head coach. “The challenge here is to build up a proper style of play. In other countries, it is smaller and there is a similar type of player.

“In this country, we have different backgrounds and many different ideas. So bringing players from different teams in different parts of the country and put them together and make them work with the same style of play is the biggest challenge.”

Now in charge of his first youth national team, Perez is quick to get to work on making the direction of his team clear.

“This camp is very much about what is the style of play,” he said about his first camp. “It is about what we want from them individually and as a team. On the field today, I was giving them one directive, move the ball quickly.”

The players said they have enjoyed the camp so far, and all spoke about the similar message from the coaching staff in the first few days.

"I like Javier's sessions," Chivas USA Academy forward Ben Spencer told TopDrawerSoccer.com. Spencer also said he thought Perez was focusing on possession and speed of play in the first days of camp.

"The new staff is focusing on speed of play and getting the ball moving quicker," De Anza Force defender Michael Amick told TopDrawerSoccer.com. "We have been working on possession in short, tight spaces. It has been good so far."

U17 World Cup veteran Alejandro Guido agreed with his teammates: "The coaching staff is focused on possession and getting the ball forward."

As the coach builds this team and the style of play, one element of his past may have a hand in helping him take the best approach to utilizing his players.

“I don’t think sports science is a big thing here or in other Anglo-Saxon countries, but it is in Spain and Portugal,” Perez said about his educational upbringing. “A sport science background helps you understand the game from a different point of view, not only as a coach, but also to see the productivity of the players. It helps understand how the players can be more efficient on the field.”

Even with a notable educational background, Perez recognized that as a young head coach in the youth national team program, he is a bit unique.

“I would say it is probably an unusual profile - to have a young coach with this type of role – but I feel very confident and comfortable with the position. I am extremely happy and excited.”