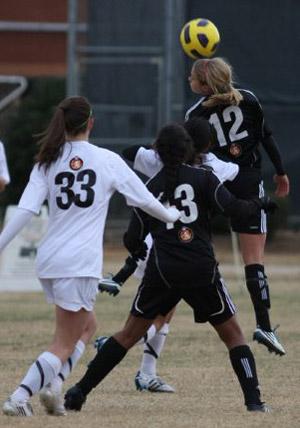 The Great Lakes region of Players to Watch had a lot of changes with the 2014 Girls class. The biggest leap was from Megan Buckingham, who jumped five places into the top ten and along some of the best in the region.

“It feels good to play with some of the best players and to be right around their level of play,” said Buckingham. “I’ve put a lot of work into my game and it’s rewarding to see myself play with and against these players.”

Megan attributes her strong play to her coaches, who have given the knowledge of the game and the ability to see a couple of plays ahead. But she recognizes she has a long way to go.

“I am a work in progress, and can improve my game in every aspect,” she said.

The Michigan Hawks central midfielder has set it in her mind for 2011 to help her team win regionals in Wisconsin, and go on to the national championship. On the personal side, and to help her squad, she wants to develop her speed of play, make it quicker and make it stronger.

As for the rest of the class, Virginia recruit Olivia Brannan leads the 2011 Girls, and Illinois commit Taylore Peterson tops the 2012 Girls. North Carolina verbal Summer Green ranks #1 in the 2013 Girls rankings, while Nicole Zuckerman sits atop the 2014 Girls, and Reilly Martins heads the 2015 Girls.

For the boys, Akron recruit William Trapp secures top spot for the 2011 Boys, Residency standout Andrew Oliver does the same for the 2012 Boys, and Miguel Polley leads the 2013 Boys.  Jeffrey Rhodes is #1 in the rankings for 2014 Boys while Carter Richardson and Cameron Lindley lead the 2015 and 2016 Boys respectively.

You can see all the Players To Watch Regional Top 20 rankings here.