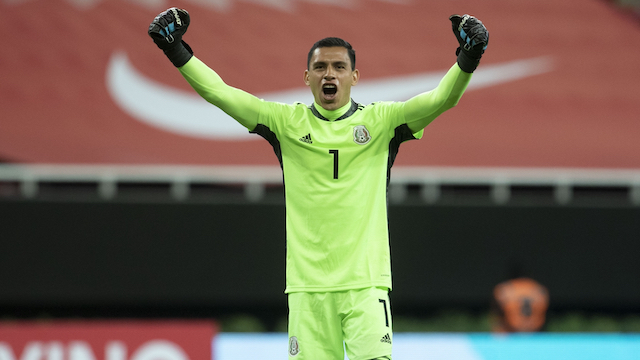 It was a moment. A mistake. A lapse.

That’s all it took to give Mexico a 1-0 win over USA on Wednesday night in the game between the top two teams in Group A at the Concacaf Olympic Qualifying. Both teams had already secured a spot in the semifinals prior to the game.

Mexico advances as the group winner from Group A and will face the runner-up from Group B on Sunday in the semifinal. USA will face the winner from Group B on Sunday. The final standings for Group B will be decided tomorrow when Canada takes on Honduras and El Salvador squares off against Haiti. USA will either face Honduras or Canada in the semifinal game, the winner of that game will earn a spot at the Olympic Games this summer in Tokyo.

Wednesday’s game was not a sublime performance from either team, which was probably expected given the lack of drama from the outcome of the contest.

The deciding moment of the game came late in the first half. USA center forward Sebastian Soto dropped deep to receive the ball in the center of the field from left center back Henry Kessler - perhaps the question should be framed around whether Soto should’ve been in that spot at that stage of the game anyway. The fundamental breakdown from the lack of awareness to check his surroundings before playing a pass was swiftly punished by former LA Galaxy winger Uriel Antuna who took advantage of Soto’s assist and buried his shot from the top of the box past David Ochoa.

The opening half was even. USA had more of the possession with 54% at the break, but lacked the quality in the final third to threaten the opposition. USA was only credited with one shot in the opening half, while Mexico managed eight shots. Ochoa had three saves at the break.

USA played with courage. They invited the pressure from Mexico and did well in possession. It fell apart the further up the field the US went with the ball. For the quality and crispness of the passing and movement in the defensive third, the USA attack was stale and unimaginative with the ball. The wingers often took too many touches and any movement was either ruined by an extra touch or a tactical foul. There were 36 fouls in the game - Mexico committed 20 - before the first yellow card was handed out. It felt like a college game at times.

Another part of the struggle from USA in the final third was the wastefulness on set pieces. USA had five corner kicks and a handful of other set piece opportunities, but the delivery was not there to create real chances. The best service for USA came in the 36th minute when a driven ball behind the defense and in front of the keeper created some confusion. Mexico cleared the chance, but goalkeeper Luis Malagón was injured on the play. Reserve keeper Sebastián Jurado replaced Malagón.

USA could not challenge the new man in goal until the 59th minute, 20 minutes after he came on the field. It was the first shot on goal of the game from USA. The shot came from header from Johnny, who was on his knees after getting tangled on the far post on a corner kick.

USA head coach Jason Kreis went to his bench in hope for answers in the attack during the last half hour. He brought on Jesus Ferreira, Jackson Yueill, and Jonathan Lewis in a triple substitution. Ferreira was a brave sub, as the forward was sitting on a yellow card. The FC Dallas attacker survived the final 30 minutes without incident.

The trio of new legs brought a new look to the game, but USA still could not solve the Mexico defense. USA finished the game with five shots, only two on frame. Mexico had 12 shots in the game.

The attention, pressure, intensity only amplifies from here. Sunday’s semifinal is the only game that matters. Kreis and his staff have some big decisions to make between now and then as the fate of ending an embarrassing streak is on the line.