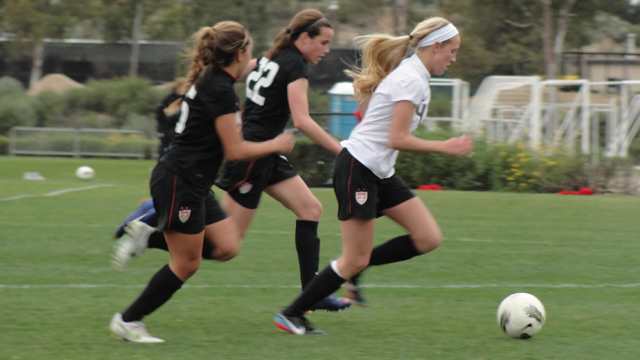 CHULA VISTA, California – The U.S. U17 Women’s National Team is always looking for a good challenging game. On Tuesday, the team did not need to look far as the U17 WNT had a very competitive intersquad scrimmage that ended with a debutante making a big splash. 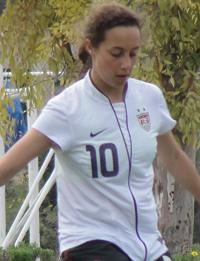 At the end of the three 30-minute periods, the White Team emerged victorious 2-1 thanks to a pair of goals from Mia Hoen-Beck, who is in her first national team camp at any level. Kaycie Tillman had the lone goal for the Black Team, which was pretty close, in terms of personnel, to the team that played Germany at the Home Depot Center in February.

The final result hardly mattered though, as the coaching staff had players switching teams during the third period just to see who could fit where. Head coach BJ Snow was pleased with the competitiveness of the game and the overall level of play.

“I was really pleased with a number of things – one of the objectives of this camp was to find out the versatility of players and we defined that on the first day,” Snow told TopDrawerSoccer.com. “The competitiveness was really good. The soccer was pretty good – we certainly have a lot of things to work on, but playing 90 minutes after three hard days of practice is not easy. I was really happy with their attitudes and eagerness to compete.”

Hoen-Beck did not wait long to make her mark on the game. The energetic attacker took advantage of a deflected cross from the right flank in the second minute for her first goal of the game. Hoen-Beck took control of the ball about 15 yards from the net. She skated past the charging center back and then slotted it around the sliding goalkeeper.

The McLean Soccer star doubled the lead 17 minutes later when she received a great diagonal pass from Bridgette Andrzejewski. Hoen-Beck’s first touch was sublime and allowed her to slip past the final defender. She picked her head up and poked the bouncing ball over the outrushing keeper and into the net.

“It felt good to score,” Hoen-Beck told TopDrawerSoccer.com after the game. “Scoring is always good. It is really good for my confidence and confidence is just going to make me play better out here.”

Tillman cut the White lead to one-goal with two minutes left in the opening period when she punished the White defense and goalkeeper for failing to deal with a diagonal ball from Anika Rodriguez behind the defensive line. Tillman beat everyone to the ball and touched it past the keeper and into the open net.

It was one of the four chances on the day that Tillman had when she got behind the defense and had a breakaway on goal. On the other occasions, the keeper did well to push Tillman away from the net and force her to cross it back to the middle, which did not lend much of a threat on the goal.

To the credit of the Black Team, it had more possession in the opening period, but it could not consistently generate chances in the final third against the White Team. The White midfield trio of Peyton Perea, Dorian Bailey, and Hoen-Beck were superb in interrupting the play and quickly getting the squad into the attack.

The center back pairing of Ally Prisock and Michaela Abam seemed to handle any charge down the center from the Black Team. Prisock’s confidence on the ball was a major plus for the White Team on the day, as she did well with distribution to pick out the attackers.

The second period had a few chances for both teams to strike another goal, but the goalkeepers were up to the challenge. Black goalkeeper Katherine Hess did well on a few occasions including thwarting Hoen-Beck’s hat trick bid with a comfortable save from a tight angle.

In the other net, Brooke Heinsohn stopped a couple of shots from Tillman to preserve the lead for the White Team.

Snow altered the teams in the final period, which took a bit of the punch away from the game as players had to readjust to the tendencies of their new teammates. The Black Team dominated the closing moments, but Prisock and new center back partner Natalie Jacobs held off attack for the most part.