Michael Edwards trending up at Wolfsburg 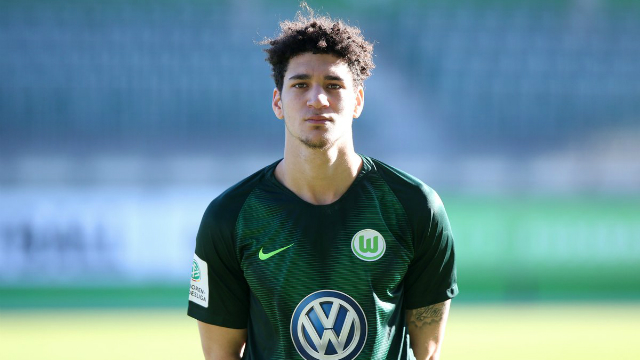 Of the ever-growing number of young Americans looking to break through abroad, few can say they’ve matched the success of center back Michael Edwards in 2019.

On the books at Wolfsburg’s Under-19 Academy side, since he became eligible for the team back in January, Edwards has played in 11 league matches. During that stretch, the team has a 10-1 record, recently cementing the U19 Junioren-A title in the North/Northeast. They’ve conceded just seven goals from those games, and also have the Niedersachsen-Pokal (youth Cup) on the horizon on May 26 against Hannover.

Over the weekend, Edwards even made the bench for Wolfsburg II, the team’s reserve side that competes in the Regionalliga Nord. When he didn’t make the bench, Edwards was back with the Under-19s, playing 90 minutes in a 5-1 win against TSV Havelse.

For Edwards, the biggest challenge of adjusting to his new home hasn’t even necessarily been about his performance on the field.

“The mental part, it’s not always easy, I knew before I signed that it was going to be tough and challenging mentally,” he told TopDrawerSoccer. “I think I found my way and I feel pretty good.”

Formerly with D.C. United’s Academy prior to his move abroad, Edwards kept his options open dating back to last year, looking at college, Homegrown or European possibilities. Working with the sports agency Octagon, he was able to land a trial with Wolfsburg last August, at the start of the club’s season. After spending two weeks there, he was offered a spot on the team.

However, due to the fact that Edwards didn’t turn 18 until November 27, 2018, it meant he wouldn’t be able to join the team before that date. And given the registration rules in the Bundesliga, Edwards wasn’t able to compete in any competitive matches until this past February.

Still, the defender made the most of his time, moving to Germany in October to train and stay sharp with Wolfsburg. It was shortly after coming back at that time that the coaching staff challenged the teenage defender.

“When I first got here, I had a chat with the coach and he told me I had to raise my level a bit, and I took that personally, and I really think that it hit a spot, lit a fire in me,” he said. “I started working harder, playing better, and I was able to solidify my spot in the back line and get 90 minutes a game.”

After returning home for the holidays, Edwards was back for preseason with the Under-19s during the first week of January. He was able to retain his spot as a starter, and when the A-Junioren season resumed on February 2 against RB Leipzig, Edwards started, played 90 minutes in a 2-0 win.

While there were no eye-opening moments in that first game, the Virginia native did say the level was a significant step up from what he had been used to.

“The speed of play was probably the biggest adjustment for me,” Edwards said. “Here, you don’t have as much time on the ball as you do in the USSDA. I feel like the guys really were welcoming and they made me feel comfortable, which was also a big plus in getting confidence, so I felt comfortable playing with [them].”

Stepping into a locker room where you don’t know any of your teammates, trying to win a starting spot, not to mention not speaking a word of the language, is a daunting task. But Edwards said his teammates were welcoming, offering him a spot to sit in the locker room and bringing him into conversations. While he’s been taking German classes, teammates helped translate for him when he was new to the country.

Even though his time in Germany’s been relatively short, Edwards said he’s improved significantly and his listening comprehension has improved dramatically.

“On the pitch, I think I’ve caught on pretty quickly, I think I understand most of the things the trainer or my teammates are telling me to do,” he said. “That’s good, that’s the most important thing. I’m still working on my speaking, but understanding is not so hard anymore.”

Aiding his adjustment is the presence of a couple of Americans at the club. U.S. U20 forward Ulysses Llanez and Edwards are roommates, offering another young American at the club to help with the adjustment to a new culture. U.S. men’s national team center back John Brooks is also on the first team at Wolfsburg, and Edwards says that Brooks helps him out whenever he is promoted to train with them.

The opportunities to train with the first team squad boosted his confidence, though came with a bit of trepidation when he first got the call.

“I was pretty nervous,” Edwards said. “But once you get on the ball and start connecting your passes, you start to get more comfortable, more confident, you just play.”

Calm and composed at the back, Edwards has plenty of attributes demanded from a modern central defender. Clean with his touches and capable of spraying the ball around, he says that his game has improved significantly since arriving in Germany.

Only one game is left in the A-Junioren season, along with Cup games slated for the end of May. After that, he’ll get a few weeks off in the summer, and head back home to Woodbridge to spend some time with his family – his older brothers Max and Jordan play college soccer at Florida Gulf Coast(m) and George Mason respectively – unless he’s a late call-up to the U.S. U20 MNT World Cup squad, which is set to be announced later this week. Part of the Under-17 player pool, as a 2000, Edwards is eligible to play for the U.S. at this year’s U20 World Cup. It’s something of a longshot at this point, as he hasn’t earned a call-up to a U20 camp at any point this cycle.

Regardless of that, it’s been a strong first season of professional soccer for Edwards. And right now, his focus is on finishing the season strong at Wolfsburg, while continuing to work hard to get better on the field.

“My left foot is a pretty big weakness in my game,” he said. “Being able to improve my passing with my left foot, I feel like that would really be able to take my game to the next level and play at the next level in the Bundesliga.”