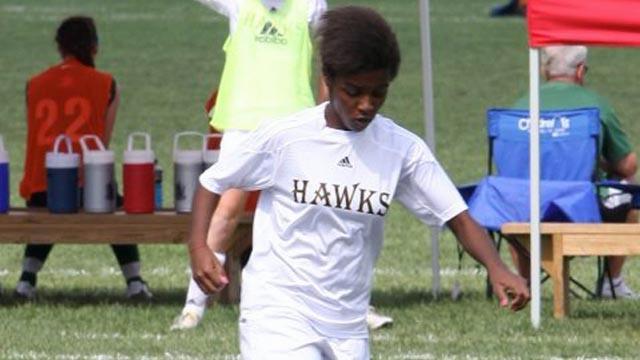 Those are two words that come to mind when describing Rilka Noel.

The 14-year-old midfielder plays for the Michigan Hawks U15 ECNL club and was also a member of the U.S. U14 Girls National Team that attended training camp under Michelle French at the Home Depot Center in September.

“Rilka is a player with tremendous upside,” Michigan Hawks Head Coach Adil Salmoni said. “She has the physical tools and the technical ability to be a dominant force in the final third, and does strike a good ball.” 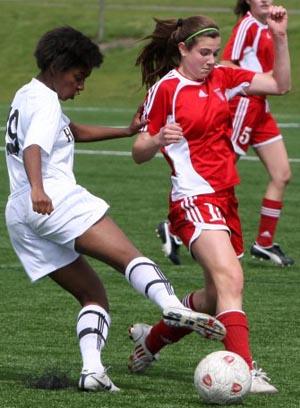 Rilka Noel (left) competes.
She didn’t disappoint in training camp either. She was never afraid to take on a defender, and had great instincts going forward. She did not play with the flashiness that most consider top players to have, but don’t think she wasn’t effective. It was actually her simplicity that allowed her to get inside the 18-yard box several times throughout three scrimmages, creating dangerous chances at goal.

When Coach French spoke about Rilka’s play in training camp, she noted the danger that she can create, her fantastic footwork and smoothness on the ball. However French mentioned Rilka needs to develop a killer instinct to take over the game and be the go-to player on her side.

Rilka showed that hunger throughout the training camp in bits. It was her hesitation of becoming that center figure that deterred her from displaying her potential threat. But as Salmoni puts it, it’s not in her demeanor to play that role.

“It seems that the only things that stop her from taking over games are her humility and selflessness on the pitch,” Salmoni said. “She is a team player who likes to share the ball and shies away from the spotlight. She is an asset on a team that has won back-to-back Regional Championships.”

Aside from her exceptional soccer astuteness, Rilka has a side of her persona that very much impresses anyone she speaks with.

“Rilka is a bright kid who is never too far from a book. A trait long lost on most teenagers,” Salmoni said. “She can hold deeply intellectual conversations in a myriad of subjects ranging from philosophy to Premier League tactics. We are fortunate to count Rilka among our players.”

It’s impressive, for an athlete, and for just anybody at any age to find interest and aspire to engage in so many diverse subjects. A great soccer player scores goals, runs by defenders and makes the perfect pass. But a great individual understands the benefits of looking beyond the game, and develop knowledge to become a multi-dimensional person, which is what Rilka is becoming.
Related: Players To Watch,