Scroll down for links to our complete national and regional player rankings and TeamRank regional and national standings.

Collin Martin, D.C. United Academy (Washington DC), U16, Midfielder: D.C. United’s Collin Martin, who contributed 13 goals during the club’s run to the top of the Mid-Atlantic Division, was recently named to the U.S. Soccer Development Academy Starting XI U-15/16. 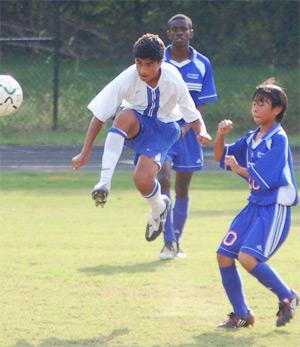 Chris Somerville, Baltimore Bays Chelsea (MD), U18, Forward: Chris Somerville, a member of U18 U.S. National Team pool, plays forward for the U18 Baltimore Bays Chelsea. Chris was a leader in the play-off wins helping the Bays to the Development Academy national finals week. He was the Bay’s offensive leader scoring the game winning goal against Seacoast and providing a key assist against Scott Gallagher of Missouri.

Patrick Tshiani, Bethesda AC (MD), U16, Forward: Patrick had three goals and an assist in his team’s march to the ASL Championship. He also had two goals in the semifinal vs. CESA (4-time South Carolina State Cup champions) and a goal and an assist in the final vs. Beach FC.

Ryan Massey, Bethesda AC (MD), U16, Goalkeeper: Ryan anchored the defense for Bethesda AC U16’s leading his team to a commanding defensive performance with two shutouts and only one goal conceded in three games at the ASL Championships.

Mark Bonnie, Central Delaware SA Fire (DE), U13, Midfielder: Mark scored two spectacular goals on set plays in back to back games during the State Cup. The first came on a free kick from about 30 yards out placed over the goalkeeper’s head into the top of the goal. The second goal came during the Championship game via a free kick from a tough angle 20 yards out finding the upper right hand corner of the goal.

Tommy Gallucci, Central Delaware SA Fire (DE), U13, Defender: Tommy started every game in the Delaware State Cup at left back. He was relentless in stopping attacking players thus minimizing opponent shots on goal percentage. In addition to anchoring the defense Tommy made several runs out of the back relieving pressure on the defense and helping to spark the offense.

Chris McPoyle, Central Delaware SA Fire (DE), U13, Forward: Chris scored 5 goals in 5 games during CDSA Fire’s run to the U13 Delaware State Cup. The most important goal was the game winner midway through the second half of the championship game. After scoring the eventual game winner, Chris dropped back to defense to provide extra support helping his team to win its first State Championship.

Peter Pearson, Beach FC Red (VA), U16, Midfielder/Forward: Peter’s Virginia 1995 ODP team won the National Championship in Phoenix, AZ with Peter scoring two of the three goals to defeat Washington 3-1 in the final. Peter was also instrumental in leading his Beach FC team to the final of the U16 Atlantic Soccer League (ASL) in Columbia, MD.

Eric Bird, Beach FC Red (VA), U18, Midfielder: Eric was chosen as the Virginia AAA High School Co-player of the Year as he led his two time State Champion Cox High School to the state semi-finals. Eric will attend University of Virginia this fall.

Curtis Kirby, Beach FC Red (VA), U15, Midfielder: Curtis led his team to the semifinals of Region 1 Championships in Lancaster, PA before losing to eventual champions SDFC. Curtis started all four games and scored a spectacular 25 yard goal that advanced the team to the semi-finals on goal difference.

Moja Hale, Hockessin SC Heat (DE), U16, Forward: Moja Hale led the U16 boys at the Region I Championship in goals scored with four including two goals in each of the HSC Heat’s last two group games to produce a tie and a win.

Jessie Klamut, Beach FC Red (VA) U18, Forward: Beach FC U18 Red’s Jessie Klamut was selected Virginia High School AAA Player of the Year. The Cox High School 2011 graduate is a two-time All-Tidewater Player of the Year who this past season led the Eastern Region with 27 goals and helped lead Cox to the Group AAA state championship game. Jessie signed to play with Old Dominion this fall.

Holley Beasley, Norfolk Academy High School/Beach FC Red, U18 (VA), Midfielder: Holley Beasley, midfielder for the Beach FC U18 Red, was the 2010-2011 Virginia Independent Schools Soccer Athletic Association Division I VA State Player of the Year. The Norfolk Academy graduate is also a two-time Tidewater Conference Player of the Year helping Norfolk win the VISAA Division I state title with 18 goals and had 11 assists. Holley will play at Washington and Lee this fall. 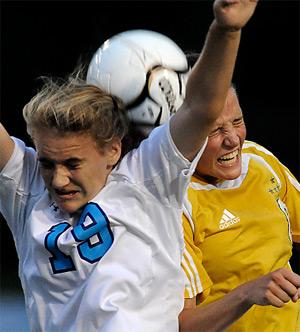 Ashley Herndon (left)
Allison Hollinger, Central Delaware SA Riptide (DE), U14, Center Midfielder: Allison is a gutsy player with excellent speed, great vision and an unflappable demeanor who has been with the CDSA Riptide since their inception five years ago. During the team’s recent State Cup and Region I tournament play, Allison selflessly moved into the center back line to help add some pace to the defense and contributed significantly to the Riptide’s 1-0 Delaware State Cup Championship win.

Cassidy Ramsey, Central Delaware SA Riptide (DE), U14, Defender: Cassidy – also with the Riptide for five years - is an exceptional outside defender with very good aerial skills. Cassidy moved from outside back to center back during the Riptide’s State Cup run to help strengthen the center defense. She made several key defensive plays in the final helping to preserve a shutout and one goal margin. Cassidy played on her high school team where she started varsity as a freshman.

Maureen Hossler, Central Delaware SA Riptide (DE), U14, Midfielder: Maureen is a very speedy and technically gifted soccer player who is two footed and loves to challenge defenders 1v1. Maureen moved to center midfield for State Cup where she was able to control the pace of our championship game distributing balls to our attacking players in position to challenge for goals. Maureen also started as a freshman on her high school soccer team this past season.

Olivia Colella, Chantilly Burn (VA), U17, Midfielder: Olivia, committed to Longwood, provided strong play in the midfield for the Chantilly Burn during the Region I Championships. Olivia provided the key assist for the game winning goal against Connecticut.

Elizabeth Gaski, Chantilly Burn (VA), U17, Forward: Elizabeth scored the only goal in the Burn’s hard fought 3-1 loss to Massachusetts. She also scored a great goal against DC United Women’s W league team in a friendly leading up to the Region I Championships.

Meghan Cox, VSC Heat Blue (VA), U17, Forward/Defender: Versatile and athletic Meghan Cox is predominately a defender for the Heat but has played forward, midfield and goalie. Meghan is a very strong, powerful and versatile player with a true passion for the game. Meghan is committed to James Madison.

Maria “Mo” Pinkston, VSC Heat Blue (VA), U17, Midfielder/Forward: Maria possesses excellent field vision, soccer IQ, a dominant left foot and a strong right foot. She plays mostly in the midfield, both outside and in the center. In the course of the season she also plays forward and outside back. Mo is a team captain, takes the penalty kicks for her team, and is one of the primary players for free kicks.