The MLS Academies enjoyed the plaudits of champions on Saturday at the BBVA Compass Stadium in Houston, Texas at the 2012-13 Development Academy National Championship.

New York Red Bulls won their second national championship with a 2-1 overtime victory over Shattuck-Saint Mary’s in the U18 age group. Jhon Estama and Ethan Decker provided the tallies for the Red Bulls.

Real Salt Lake captured its first Development Academy National Championship with a 4-2 victory over Solar Chelsea SC in the U16 clash. Brooks Lennon led the way for the residential academy with a goal and two assists.

After winning the U16 Development Academy National Championship in 2012, the target was on Red Bulls back all season. On Saturday, Red Bulls survived the final challege as they repeated as champions with an overtime victory over Minnesota club Shattuck-Saint Mary’s.

SSM opened the scoring in the ninth minute when Eddosa Muhammad dribbled past a few New York defenders before ripping a cross to the far post, which Lesley Nchanji slotted into the net.

New York answered 21 minutes later when Connecticut recruit Ethan Decker hit a laser from 25 yards out that smashed into the roof of the net.

The MLS academy had the run of play for the majority of the game, but could not break through the SSM defense for most of the day. SSM goalkeeper Joseph Melong came up with his biggest save shortly after halftime when he stoned Alex Muyl on a breakaway.

The two squads went to overtime where New York continued to turn on the pressure and was eventually rewarded for its efforts.

Arun Basuljevic, the Georgetown recruit, dribbled through the center of the defense and placed a shot to the lower right corner of the net. Melong palmed away the save, but Estama was there for the easy finish into the open net.

New York saw out the final six minutes of overtime to capture the title, which was the first for the club in the U18 age group and second overall. 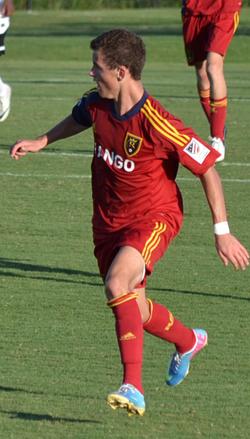 In the opening game of the evening from BBVA Compass Stadium, Real Salt Lake Arizona defeated Solar Chelsea SC 4-2 behind a goal and two assists from Brooks Lennon.

Solar SC (Dallas, Texas) took the lead midway through the first half when U.S. U17 Men’s National Team forward Alan Winn knocked in a header from Jordan Shankle.

Real Salt Lake grabbed the equalizer three minutes later when Lennon tallied his first of the game off an assist from Sebastian Saucedo.

With four minutes left in the opening half, RSL grabbed the lead when Saucedo finished his second goal of Finals Week thanks to an assist from Lennon. Forward Jose Hernandez also helped in the buildup that unlocked the Solar defense.

The Texas club brought the game back on level terms in the 65th minute when Duke commit Bryson Asher’s deft touch on Caleb Smith’s cross nestled into the far corner of the net.

Once again, the MLS academy was quick to respond as Lennon streaked past the defense and was brought down in the box by Solar’s Trevor Baum. The refereed awarded a penalty kick and showed a red card to Baum.

Solar goalkeeper Isaac Linnabary came up huge on Lennon’s penalty kick shot and blocked the effort out for a corner kick. The celebration was only temporary though, as RSL scored the game-winning goal on the ensuing set piece.

Damian German, the hero for RSL on Thursday, headed the corner kick into the middle of the box, which Justen Glad pushed into the back of the net with only four minutes left in the game.

RSL added an insurance goal in the 79th minute when Lennon picked out Evan Waldrep’s run. The substitute tucked it away for his first goal of the season.