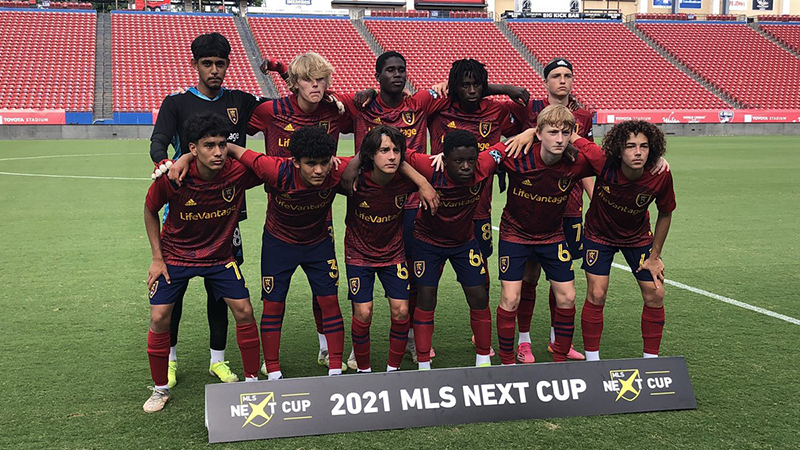 No stranger to playing for championships at the youth level, Real Salt Lake became the first team to raise the MLS Next Cup.

The RSL Under-15s defeated the Philadelphia Union by a 2-0 score to win the knockout competition at their age group.

A Jude Wellings goal in the 15th minute provided the winning margin, as RSL was able to shackle a Philadelphia Union side that had excelled during the competition. Evan Pickering doubled the lead with 15 minutes to go.

It was a moment of magic from Izahi Amparo that provided the decisive margin. Amparo beat a couple of Union defenders and picked out Wellings to put Real Salt Lake up by a 1-0 score.

Barjung Darboe had the best chance to tie the game in the 53rd minute for the Union. A flick-on from Gael Medrano played Darboe into space. He held off an RSL defender, but fired just wide of the far post.

From there, RSL was content to sit back and let the Union have possession, looking to add to the lead on the counter attack. They looked to Axel Kei to spring most counters, though the Union back line managed to maintain the deficit – until a corner kick in the 65th minute.

After one of those counters earned a set piece for RSL, Evan Pickering glanced home a second goal for Real Salt Lake. The Union pushed forward looking to get back into the game, but RSL continued to look strong, absorbing pressure and continuing to look for Kei to add another goal.

Fernando Delgado made a tremendous save with five minutes to go from Darboe after great work from Medrano. The Union striker was denied by the lunging RSL goalkeeper, capping off an excellent tournament for Delgado.

In an all-Florida matchup in the U16 MLS Next Cup title matchup, Weston FC jumped out with three goals in the first 22 minutes of the game against Tampa Bay United.

Weston then held on as Tampa Bay clawed back a pair of goals in the second half, but Weston held on for a 3-2 victory.

Nicolas Weyenberg kicked off the goal-scoring barrage, finishing a corner kick in the sixth minute. Benjamin Cremaschi found Nicolas Preciado at the top of the box just nine minutes later, and he took a touch around a Tampa Bay defender to double the lead. Preciado returned the favor to Cremaschi, chipping a pass over the Tampa Bay back line in the 22nd minute that Cremaschi finished.

Isaiah Wilson dialed up a long-distance strike to cut into the lead, and a Weston FC red card gave Tampa a man-advantage and a way back into the game. Robert White's 72nd minute goal drew his side one goal closer, but Weston dug in and held on.

Isaac Delgado made two saves in the penalty shootout, as Orlando lifted the trophy after a 0-0 draw against PDA.

Neither side could manage a goal during regular time, but there were chances for both sides. Alexandra Freeman hit the post for Orlando City, coming closest for either side. PDA goalkeeper Rafael Ponce de Leon was also excellent, making several stops to keep the game scoreless.

A Missael Rodriguez goal in the 80th minute secured the U19 title match for the Chicago Fire, which held off Solar SC by a 1-0 score in the final of four championship matches.

Maximiliano Viera sent in a chipped cross over that back line that Rodriguez, with his back to goal, headed over an on-rushing Solar goalkeeper to put the Fire in the lead for good. The game wasn't done for dramatics after that, as the Fire required a stoppage-time save from Samuel Price to secure the victory.

Solar had a chance to go up a goal in the 50th minute after earning a penalty kick. However, Richard Garcia got a touch unlucky, as his penalty hit both posts and bounced clear.