We’ve got heavy-hitters this week.

Six top 100 players and several of our Region Top 20s are featured in this who’s who of top prospects.

Makenzy Doniak (Slammers FC), our No. 28 ranked player for the 2012 class, officially pledged her allegiance to Virginia this week – choosing the Cavaliers over a host of other schools on her wish list, including: USC, Stanford, Notre Dame Texas and UCLA.

"I just felt a connection to Virginia," said Doniak, a star forward who has U.S. Soccer National Team experience and will bring instant impact to her new program. "I loved everything about the campus, and the coaching staff is amazing." 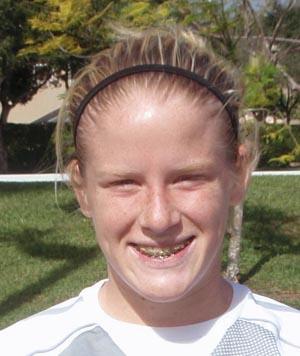 Makenzy Doniak
Rachel Ames (Birmingham United) is our No. 32 prospect for the 2012 class, and will be taking her talents to Yale. Ames is a versatile goalkeeper with a great approach and work ethic.

Brecken Holbrook (La Roca Premier) is No. 55 in the 2012 class and will be heading to Weber State. Holbrook is joining a pretty large contingent of La Roca players soon to become Wildcats.

“Fourteen out of the 18 girls on our team are going to (Weber State) so I’m very excited,” Holbrook said. “It’s close to home for us and the coach is really great.”

Soraya Martinez (Florida Rush), the No. 78 player in the 2012 class, is staying in state to attend South Florida. Because it’s local she’s already familiar with the program and has mentally staked her claim to a spot with the team.

“I got a chance to watch them play several times and enjoy their style. They will lose their strongest center midfielder after 2011 and I know I can fill her shoes,” Martinez said. “I love the campus and the new stadium being built and I like what the coaches have in mind for me.”

Samantha Phillips (Beach FC), a 2011, is heading to Longwood.

Violet Miller (Braddock Road YC), a 2011, is heading to Richmond.

On to the boys:

David Caban (Chicago Fire), ranked No. 10 in his 2011 class, has decided to attend Wisconsin next year. A skilled defender, Caban has been a constant standout in the U.S. Development Academy and has a bright future.

Kyle McCord
George Fradenburg (Birmingham United) is the No. 12 prospect in the 2011 class and he’s committed to Furman. A left-footed defender with blazing speed, he’s a big pick up for the Furman program.

Cody Albrecht (DC United) is going to St. John’s(m) for 2011. Said Albrecht: “Because of the type of program and tradition that St. John’s has as an athletic and academic school, I thought it was the best fit for me.”

DC United teammate Tyler Rudy, also a 2011 graduate, will be staying in the Big East and attending Georgetown.

Tommy Jaeger (Real Colorado), a 2011 defender, is going to Army next year.