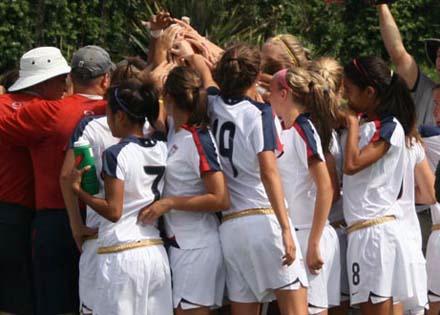 U.S. Youth soccer camps are really all about adjustments.

Players adjust to their new environment; their new teammates – the new voice imploring direction from the sidelines.

And during Monday play at the U15 Girls National Camp at the Home Depot Center in Carson, California, players were already beginning to master the game of adjustments.

An intra-squad scrimmage revealed as much. 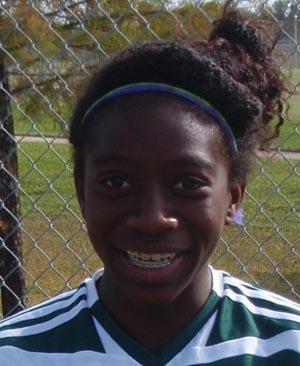 Miranda Freeman
Following a first half mostly controlled by one side, the opposing group counteracted with some intelligent second half decisions.

Amber Munerlyn (So Cal Blues) highlighted the scrimmage with two late goals that revealed a combination of game-breaking athleticism and tactical awareness.

As both teams played with three forwards, Munerlyn started to connect well with her fellow forwards, including a great run with Zoe Swift (NSA Premier Fury) where she took space until the last moment when she laid off a pass to Swift, received a return ball and capitalized.

Not too long after, Munerlyn showed off her running ability, which is both fast and powerful, basically outrunning the opposing backline to set up a 1v1 with the goalkeeper and a shot across her body that found the net.

“At halftime we talked and we had a gap in the middle and the forwards had to come back and close that. We found a rhythm and got (three) goals. Lately I’ve been a little iffy on 1v1 with the goalkeeper – I get nervous at the last second. I’ve been working on it.”

There were more good signs on the pitch than you generally see on a first day of camp and it was hard to believe that many of these same players underwent their first U.S. team experience last August. The newfound comfort level was obvious, and of course it helps to have veteran players in the mix as well including those who have played with the U17s, like: Morgan Andrews, Miranda Freeman and Joanna Boyles.

Andrews is so physically and technically advanced its hypnotizing. She does a lot of things well and played some great balls, while Boyles is very sound and sturdy.

Goalkeeper Morgan Stearns, of McLean MPS Power in Virginia, flashed some good hands and awareness in the second half where she found herself under attack.

“I was pleasantly surprised and thought the team displayed some ability that I wasn’t aware of,” said coach Mike Dickey. “There were some combinations and some work defensively that created chances and I was really happy with the adjustments made. We watched some individual matchups and it revealed some good information.”

On the agenda for the remainder of the camp, which wraps Feb. 20, the team will focus on technical work, play a scrimmage against Loyola Marymount on Friday and watch the U.S. Men play.

“They’re becoming a team,” Dickey said. “They get along and work exceptionally hard.”