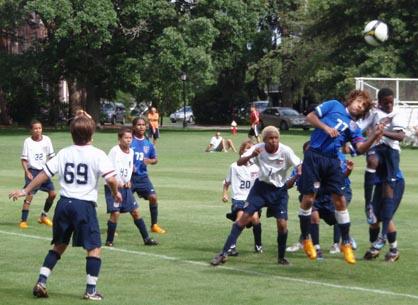 CONCORD, MASSACHUSETTS – The opening day of matches at US Soccer’s U14 Boys National Team ID camp gave more than 100 12 and 13-year olds the chance to make an impression on a cadre of national staff coaches in a low-pressure environment.

U14 BNT coach Manny Schellscheidt always stresses the removal of pressure from these situations, preferring to let players focus on learning and improving as soccer players. There is however a type of boiling down process as Monday and Tuesday matches among four U.S. Youth Soccer Regional ODP teams and two teams made up of scouted and otherwise invited players from outside ODP, will lead to pool play beginning Wednesday when approximately 45 of the players will be considered for the “hot” match. Who participates in that game each day is fluid, as is also the case when this cycle continues through events at Walt Disney World at Thanksgiving, Mexico in early 2010 and Home Depot Center next June. 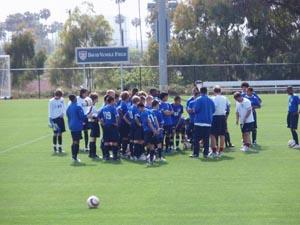 More than 100 12 and 13-year olds are attending their first National ID camp.
Louis Mateus, a US Soccer Development Academy super scout and a longtime lieutenant of Schellscheidt at this event and with this age group, said coaches are looking for specific things in these first two days.

Mateus added that as the camp goes on, skill, soccer brains, confidence and potential are among the most important qualities for which coaches are searching.

"The first thing we look for is, where is that kid’s skill level?” he said. “Now sometimes kids at different ages and different sizes are going to have different skills because they are still changing. They are stll maturing, but then you see the difference between the first day and the last day of the camp.

"A lot of times what you see that makes the dfference is a kid’s confidence. If a kid is confident often times you’ll see a difference by the end of the week,” he continued. “Those things are important to seeing if a kid has grown by the end of the week. If they are not confident they will shy away and get scared. So those things become important for us. Do you see a growth and does the kid show potential for the long term? If he’s an average player now do we think they can get a lot better?”

While we have some details from the opening day’s matches, we have to wait until Tuesday to get hometowns and states of the players from camp administrators.

Among players who caught my eye as I tried to watch three partially overlapping matches included:


TopDrawerSoccer.com will have continued coverage of this camp through its Friday conclusion, with more detailed roster information as it becomes available.