We can’t tell you where they’re going – but we can tell you which programs are in the mix.

Today, we dish the scoop on which schools our 2012 stars are considering, and the overall status on these top prospects.

Taryn Tomczyk, FC Pennsylvania
Interested in: Georgetown, American, Villanova, Boston University
Our 43rd ranked 2012 girls prospect, Tomczyk has been more concerned with rehabbing than committing, though that hasn’t stopped her from making some recent campus visits. Having torn her ACL at regional camp last year, she has bounced back well and visited Villanova and Boston University over the past couple months. Her plan is to make get back on the field before she makes any decisions.

“Being that I was injured, I’m looking to make a decision in the spring so that other schools interested in me can see me play again,” she said. 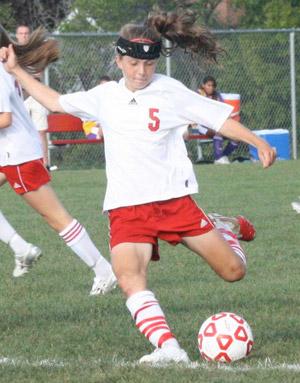 Tessa Devereaux
Jamie Kator, Albertson SC
Interested in: Vanderbilt, Texas; a few Ivy League schools are in play as well as some California programs.
“I am hoping to commit by the end of February, but we’ll see,” said Kator, our 95th ranked player.

Tessa Devereaux, Empire United
Interested in: Columbia, Syracuse, Connecticut, Binghamton, Dartmouth
Devereaux is 70th in our 2012 rankings and says she is in no rush because she wants to make sure she makes the right decision.

Emma Holm, Crossfire Premier
Ranked No. 73, Holm still has some narrowing down to do.
“I’m looking mainly at west coast schools, but I haven’t narrowed it down much,” she said. “I’m hoping to commit by the summer.”

Jessica Lee, Arsenal Soccer Club (N.J.)
Interested in: Princeton, Harvard, Yale, Boston University
Lee, our No. 94, said she will be taking the ACT this month and moving forward from there.

On the boys’ side there is naturally less sense of urgency, but still some juicy leads:

Will Cross, Brentwood SC
Interested in: Northwestern, Stanford, Harvard, Memphis, Cornell, Colgate
Cross, our 54th ranked 2012 player, has yet to take many visits.

Holden Fender, Concorde Fire
Interested in: Wake Forest, SMU, UCLA, South Carolina, UCF
Fender, 43rd in the land, is leaning more toward choosing a program relatively close to home. He still has plenty of campuses to see, though.

“Hopefully, I can make my decision by April or May - if not sooner,” he said.

“I'd like to commit by the end of 2011, and I would like to perform and show these colleges I have what it takes to receive an excellent scholarship,” he said.

Where are you thinking of committing? Email us at commit@topdrawersoccer.com or tell Jahmal on Facebook.