When Morgan Proffitt was nearly hit by an oncoming car, that’s when she knew for sure that she was love struck with Marquette.

We’ll explain: Proffitt was in the midst of her unofficial visit to Marquette when she became so absorbed by her conversation with coach Markus Roeders that she stepped on Wisconsin Avenue without looking.

Fortunately for Proffitt, the approaching car somehow managed to miss the can’t-miss prospect. But Marquette still has Proffitt’s undivided attention, along with her 2013 commitment.

The Carmel United midfielder, and our No. 69 ranked 2013 player, Proffitt also strongly considered Dayton, Clemson, South Carolina and Wisconsin. But she apparently never had an “uh-oh” moment while visiting those programs. 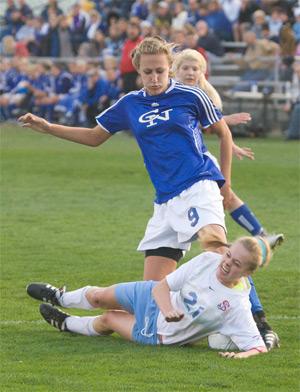 Morgan Proffitt (blue)
“Marquette not only fit my style, but offered a great family and team environment,” Proffitt said. “I wanted a very competitive program that fit my soccer style, and they try to possess and have very good technical skills.”

While South Carolina was one of the programs that missed out on Proffitt, the Gamecocks did add a special name when Freestate SA midfielder Lindsey Lane.

Lane is ranked No. 21 in our 2013 Top 100 Ranking and told us that she recently settled on her difficult college decision.

“It pretty much came down to South Carolina and Miami (FL). I loved them both,” Lane said. “What I was looking for in a program was the opportunity to come in right away and make an impact. One thing South Carolina did that set them apart was focus on my strengths and what I could immediately bring to the team.”

Among those many things Lane will bring is good speed and experience. Lane has been a part of the U.S. Youth National Program and is a strong player in the ECNL.

Also making big news recently is El Paso Galaxy striker Jenny Chiu, who announced she has committed to North Carolina for the 2013 season.

Chiu is a special athlete who likely benefits from friendly household competitiveness with her brother Andy Chiu. She has been a regular in the U.S. Youth National Program and is ranked No. 29 in our Top 100 Ranking.

Chiu said she also considered Boston College, Notre Dame and Stanford but was taken by North Carolina’s standing in the women’s game.

“It is every female soccer player’s dream to be a Tar Heel, so I just feel blessed that my dream came true,” Chiu said. “North Carolina has an unbeatable record, and the Tar Heel tradition is something I want to be a part of.”

Here are the rest of the commits:

Hayley Wilson (Freestate Soccer Alliance) has verbally committed to Villanova for the 2012 season.

Bianca Diaz (Minnesota Thunder) has verbally committed to Rice for the 2012 season.