BEAVERTON, Ore. – The U18 Men’s National Team concluded their four-day camp Monday with two full-length scrimmages at the Nike Campus.

Find out who we thought the top performers were.

This group of players will build into the U18 Men’s National Team, which will eventually compete in the next U20 World Cup.  The pool of 64 was divided into four teams, each team having 16 players for the final day of camp. 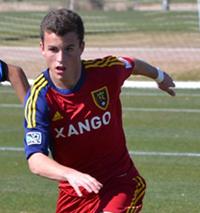 The first opportunity of the match came early for the Yellow Team, as Brendan Constantine drove the ball across the 18, finding teammate Dembakwi Yomba.  Yomba redirected the cross, narrowly missing the goal, and hit the post.

After 20 minutes, Yomba found the back of the net. His teammate, Connor Smith stood at the corner flag and placed the ball in the middle of the six, finding the head of Yomba, who headed the ball just past the keeper’s hands.

Thirty-five minutes into the half, the Yellow Team doubled its lead. Smith found Yomba down the left flank, cutting off his defender and attacking the end line. Yomba slotted the ball across the 18 to teammate Jeremy Ebobisse for an easy tap in.

The Yellow Team continued to capitalize on their space out wide, getting behind the back line and putting crosses in front of the net.

Five minutes before half, the Black Team found their way back into the game when DeAndre Robinson ran onto a ball over the top of the back line, bringing it down with his head, and volleying it on the full into the upper V.

The Black Team soon found another opportunity in front of the net, with Mohamed Kenawy striking the ball just wide. But it was in the last minute of the half that Yomba took a shot from 30 yards out, finding the back of the net, giving the Georgian his second goal of the day and his team a 3-1 lead.

Three minutes into the second half the Yellow Team was given a free kick at the top of the 18. Smith drove the ball just under the wall, but straight to the keeper.

The Black Team responded with a free kick 35 yards out midway through the second half. Robinson struck the ball on target, and it was deflected for a corner. Smith lofted the ball across the 18 finding the head of Joab Santoya, subbed in just minutes before, who found the back of the net.

With 15 minutes left, the black team tied the game at three. DeAndre Robinson got stuck in tackle after tackle, finally finding some space and cracked a shot into the bottom right hand corner.

The final score for the first scrimmage was 3-3.

Find out who we thought the top performers were.

The first opportunity of the match was for the black team, finding itself on the top of the 18 with a free kick after 17 minutes. Sebastian Saucedo drilled the ball on frame and it was deflected for a corner.

The two teams continued to battle for the rest of the half, showing fancy foot skills and quick feet, but neither team putting anything away.

It wasn’t until just before half time when the Black Team found the back of the net.  Amirgy Pineda found teammate Brooks Lennon across the field who brought the ball down and struck it far post, putting the Black Team up 1-0 at the end of the half.

Five minutes into the second half, the Yellow Team tied it up. Malcolm Jones carried the ball down the right flank and bent it behind the back line, finding the head of teammate Andrija Novakovick. Novakovich redirected the cross into the upper V.

Midway through the second half, the Black Team answered back, capitalizing on a corner kick. After being driven across the face of the goal, the ball popped out on top of the 18. Pineda took a touch and drilled it with his left, finding the lower right hand corner of the net, giving the Black Team a 2-1 lead.

The Yellow Team would later have two more opportunities in the second half, one coming after 77 minutes with a shot just wide of the net. Two minutes later, Mukwelle Akale slipped teammate Benjamin Swanson in behind the back line. Swanson’s shot was deflected for a corner; however, the Yellow Team was unable to capitalize on their opportunity.

As the final whistle blew, the Black Team came away with a 2-1 victory.