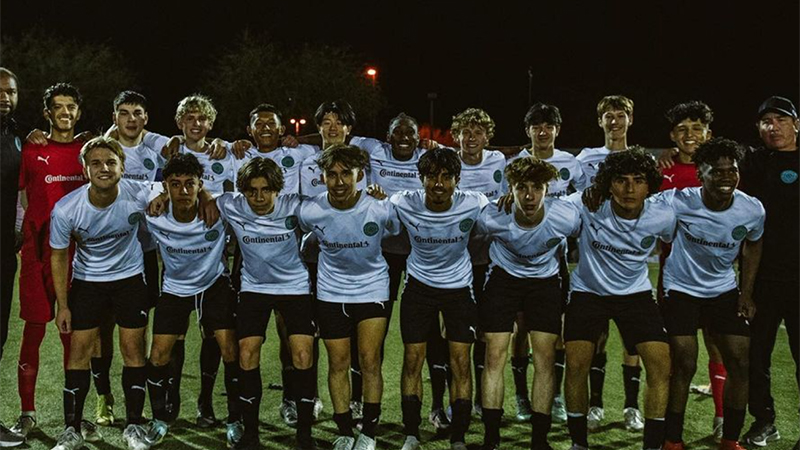 The two sides went back and forth throughout the night in a high scoring thriller which could only be described as an instant classic.

It did not take long for the scoring to get going during the contest. In the seventh minute the East delivered a ball into the box which was put away by Alex Harris to give them a quick 1-0 lead.

The East continued to control most of the flow and possession throughout a large portion of the first half, but as the West grew into the game, their scoring chances also began to increase.

Right before halftime, in the 43rd minute, Kaloyan Iliev found himself open right in front of goal and was able to slot one home to tie things up at 1-1.

The West took the momentum from that goal and carried it right into the second half with them. In the 50th minute, Djibognihou Koulai powered his way through seemingly the entire East defense and finished off an incredible goal in the box to give the West their first lead of the night at 2-1.

It did not take long for the East to respond though. In the 58th minute, after the West had just hit the post and narrowly missed doubling their lead, Anders Beckton hit a shot from outside the box into the lower left corner to level it up at 2-2. The East then snatched their lead back in the 65th minute on a goal by Kyle Livermore.

The West continued generating chances in hopes of tying the game up late, but as the 80th minute approached, the East defense continued to stave off the tying goal.

Then things got really crazy.

In the 80th minute, Iliev was given a little too much space in the box and was able to get a pass and roll one past the keeper for his second goal of the night to knot things up at 3-3.

Just a few minutes later, Manuel Portillo was taken down in the box to give the West a penalty kick. With hundreds of people standing directly behind the goal, Portillo calmly stepped up, sent the keeper the wrong way, and slotted the penalty home into the bottom left corner to send the crowd into a frenzy and put the West on top once again, this time at 4-3.

The East was not done yet though. In the 86th minute, Jaden Hancock scored the goal of the night, and maybe even the goal of the season. With everyone expecting a cross into the box, Hancock saw room to have a go at the near post with a shot. With the outside of his boot, Hancock hit a missile that swerved in at a ridiculous angle, catching everyone off guard, and ultimately finding the back of the net to tie the game up again.

With penalties looming, the West had a corner kick in the 89th minute, and a chance to write one more twist into the game.

On a great ball into the box, Koulai rose up above everyone and was able to head in his second goal of the game, the ninth goal of the night, and the game winner, as the West held off the East 5-4.

After the game Koulai described what a big moment the game was for him, and how being selected had been something he was working towards.

“I was very happy because that’s something I’ve been waiting for, for so long,” Koulai said. “When I got to take the field, I got to show what I’m capable of.”

Even though after the game he jokingly mentioned the last goal hit him in the face and not his forehead as he had intended, Koulai said his mindset in those final few minutes was that he needed to keep pushing forward and help his team win the game.

“I need to win this game for my team,” Koulai said. “Never give up no matter what. Just keep pushing.”