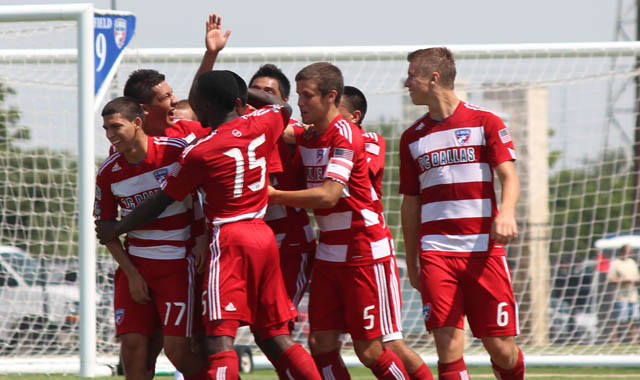 If this past weekend is any indication, there will be not much of a drop-off from FC Dallas this season.

After capturing the U18 national title, FC Dallas opened its Development Academy schedule for the first time. Almost its entire starting lineup has departed from last year’s title-winning side, but the U18s had little trouble from Classics Elite, winning 5-1 with five different goal scorers.

Yannick Koffi, Victor Portillo, Bobby Edet, Kellyn Acosta and Daniel Nevarez all scored, with four of the goals coming before the halftime break to put the result out of reach. 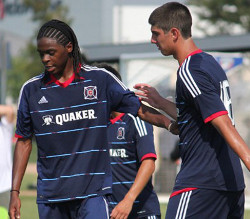 Five a theme for FCD over the weekend, as the U16s also defeated Classics with five goals, winning in a 5-0 romp.

Jeff Farina and Marcus Epps made sure that the Chicago Fire U18s start to the season was no fluke. Each attacker bagged a goal as the Fire went on the road to beat St. Louis Scott Gallagher 2-0. Chicago’s U16s picked up a point on the trip in a 2-2 draw.

Hosting a pair of Minnesota clubs, Crew Soccer Academy enjoyed a successful weekend, as the U18s and U16s both picked up a pair of wins. The Crew’s U18s won fairly comfortably, 4-1 Shattuck-Saint Mary’s and 2-0 against Minnesota Thunder. The U16s won both of its games 2-1 to make it a clean sweep.

Despite a strong start for the Indiana United Fire U18s against Vardar – Joey Bastian and Lindo Mfeka each had a goal in the first 15 minutes of the game – but Conor Bright and Yamann Sahlool answered for Vardar as the game drew 2-2. Vardar’s U16s bested Indiana United’s U16s later in the day by a 2-1 score.

The Montreal Impact know that life in the Academy isn’t going to be easy, and a weekend visit from the New York Red Bulls was a reminder of how difficult things can be at this level.

Goals from Kyle Goodwin, Alex Muyl, Erik Sa and Ismar Tandir powered New York’s U18s to a 4-1 win over the Impact. It wasn’t any closer for Montreal’s U16s either – New York won that game 4-0.

PDA and the Baltimore Bays split their two games in a battle prominent East Coast clubs. Max Kroschwitz and Alec Neumann each scored as PDA’s U18s beat the Baltimore Bays. The Bays U16s took the other game, a 3-0 win, as Abdallah Bangura scored twice and Sixtus Akinlosotu added a goal.

It was another good weekend for North Carolina Fusion goal scorer Donovan Japp, who scored two more goals on the weekend to lead his side to a 4-2 win down in Florida over Kendall SC. The host side did win easily in the U16 game, winning 4-1.

After rather blasé 0-0 draw between Real Salt Lake-AZ and Chivas USA at the U18 age group, the U16 teams combined for nine goals. Unfortunately for Chivas, seven of those nine goals were scored by Real Salt Lake’s attack, resulting in a rather lopsided 7-2 result. Sebastian Saucedo had three goals and Justen Glad had two in the victory for RSL.

Cal Odyssey was no match for either of the San Jose Earthquakes Academy sides, as San Jose’s U18s won 5-0 – Emilio Huerta scoring twice in the win – while the U16s won 4-0.