Nothing seems to be stopping this Hurricane Now think about it in the perspective of a soccer game.

That is 14 halves, seven complete games.

That is how long the Hurricane FC U16 Girls of Oklahoma have been shutting out their opponents in Region III Premier League West play. 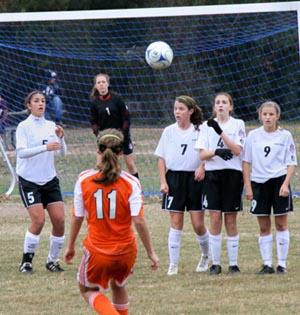 Katherine Sprouse (#11) takes a free kick.
It doesn’t matter what level of soccer a team is playing in, for any team to be so consistent throughout that length of time is noteworthy. And during such a rare occurrence, the goalkeeper’s performance is usually front and center.

For the Oklahoma-based club, Kaela Little has been an impenetrable force between the pipes.

“Our goalkeeper is fantastic, one of the best in the region,” Hurricane FC Head Coach Kerry Shubert said. “We play organized in the back and our defenders are physically strong and athletic. No one can outrun us.”

The strong defense has allowed Hurricane FC to push constantly in its final third, scoring on its opponents 26 times. Just this past weekend, the team blanked both Eclipse Black and Lonestar Red by a 4-0 margin.

“On the offensive side, we have about six to eight different players that can score, we don’t just have one player” Shubert said. “Anna Beffer had three goals during the course of the weekend while Elizabeth Keester added a couple more.”

But even with such a dominating performance this year, Hurricane FC is only seven points ahead of second place with a handful of games remaining. A slip up of any kind can cost the team its first Premier League championship.

“The league is the strongest league in the country. If we don’t play well, we have a chance to lose,” Shubert said. “Our motivation is that we’ve never won the Premier League, which is our goal this year. If we lose, it could hurt our chances. We play with that idea in the back of our minds.”

The team might have to do so without the services of Krissi Killion, who took the team on her back during last summer’s Region III Championships, but has only played three games in league due to injury, according to Shubert. Her return date is uncertain.

As the Premier League West is close to wrapping up, here is the rest of the weekend action: