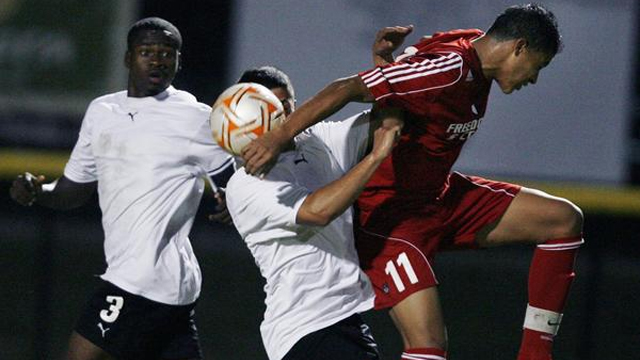 AURORA, Colo. – Joy and anguish filled the first day of the second-annual NPL Champions League Cup. Some teams waffled away opportunities; others stepped up and created success Thursday.

Still, they know, everyone knows, it’s only Day 1.

Ask any coach in the NPL and they’ll tell you this day was about starting the building process in hopes of getting better and better, and hopefully getting on the path headed towards Monday’s championship game.

Here are some highlights from Thursday’s action in the NPL on a sunny, sometimes windy and always interesting day of soccer.

U16 boys play tight games throughout

The West Florida Flames seemed to have all the momentum for most of Thursday’s 1-0 loss to CZ Elite.

For 77 minutes it seemed like the Flames were just a post or a crossbar from a sizeable lead.

Thanks to A games from Flames goalie Sean Caufield and CZ Elite keeper Juan Carlos it was scoreless until Elite defender Morales made way for a winner with his header in the 78th minute.

Morales took an arching corner kick from teammate Eduardo Mitchel and speared it into the corner of the back post. He was excited to say the least as he barreled into his teammates during the post-goal celebration.

“I saw it coming and just wanted to get good position. I think I hid a little bit,” said the 5-foot-5 defender. “Then it came right to me, and luckily, I made a good hit.”

But even Morales will admit his team was outplayed for the majority of the game.

“They were attacking and we were on our heels for a lot of it,” he said.

The Flames had their chances. Santago Patino had two remarkable ones in fact around the 60th minute. His first was headed for the top shelf of the net before Carlos tipped it into the crossbar and the Elite defense cleared it. Then, his second, moments later, was a header that seemed to be rolling towards an open net before two Elite defenders sprung in front of it and kept the game scoreless.

“We just need to regroup and find a way to win tomorrow,” Caufield said. “We need to finish and we all need to be better as a team. This is on all of us.”

Elsewhere in U16 Boys: Five of the six U16 games played Thursday were one-goal margins. On a first half penalty kick, Chicago Magic PSG midfielder Benson Sakala bulleted a kick off the Gulf Coast Texans keeper’s hands and watched it bounce into the left of the net. It was the game’s only goal.

A controversial call late in the second half opened up opportunity, followed by disgust, in the U16 Girls’ final game on Day 1.

Portland midfielder Lacy Davidson put back a ball off the post, after a free kick from 25 yards out helped dictate the result of the back-and-fourth contest.

Portland coach Brian Gant said the calls went both ways in a game that saw three lead changes. He just made it clear though, it’s those who make good on those opportunities that grab the W’s.

“Lacy made a great play and positioned herself well for that rebound on our free kick,” Gant said. “You have to take those opportunities in such a tight game like this. It was a great game.”

“Sure, there were some positives but this one is hard to swallow,” he said. “We got unlucky with the wind picking up there in the second half, then that call, that I obviously disagreed with, and followed by the ball off the post to win it for them. We had some bad breaks, but we’ll regroup.”

In the first half, Halima Matthews and Agape Alexander of Manhattan, and Simone Hertzberg and Lacy’s sister Charlie Davidson of Portland each scored to knot the halftime score at 2-2.

Elsewhere in U16 Girls:  Sofia Griff scored once in the first half and twice in the second to give the New York Rush (N.Y.) a 3-1 win over CWSA Navy (Wash.).

“I want the ball when it matters,” the 2015 Yale commit said. “I just want to help the team where I can and lead them when I should.”

CWSA Navy had its chances in the first half. It hit the crossbar and each of the posts to only manage a 1-1 tie going into halftime.

Unfortunately for CWSA Navy, the second half was all Griff.

U15 Boys has lopsided Day 1

PDA 1997 forward Jalil Blalock made most of the noise with his three goals on one end while keeper Scott Forbes forward kept it silent with his three saves on the other in the 5-0 rout over the New Mexico Rush.

Blalock hit the back of the net five times Thursday – two being called back on offside penalties – as he constantly beat the Rush defenders with his unmatched quickness.

“I felt O.K.,” the New Jersey leader in goals scored said. “I was actually pretty winded throughout. It’s hard to breath out here.”

Luckily, it didn’t show up in his game. The kid in orange and yellow Nikes constantly got behind defenders where he took advantage of his five shots – three on net – in his 50-plus minutes played.

His keeper on the other hand? He was trying to stay awake. After a couple terrific saves early, Forbes jogged around the box, set up plays and made sure to be vocal with his team to maintain his focus.

He was glad he did.

In the 60th minute he made a leaping save to preserve the shutout.

“It’s hard when you don’t get a lot of action but I’m not complaining,” he smiled. “You just have to make sure you stay ready. Luckily I did.”

Elsewhere in U15 Boys: FC Dallas Pre-Academy routed CFC Azul Juniors (Conn.) 6-0 in a division that saw five of its six games decided by three-plus goals and each decided by more than one.

“We didn’t start too strong; started a little nervous. And I wasn’t thrilled with our keepers’ play either. They made some mistakes that could cost you later,” Molina said. “But we kept fighting and managed to put on a good team effort.”

North Rockland Sting coach Neil Bluth was wondering when his team was going to wake up.

“I was nervous,” he said watching his team go into half down 1-0 after finishing a championship season (6-0-1) just weeks ago where the Sting never trailed once. “Thankfully we did.”

And then some. The Sting scored four times in the first 12 minutes of the second half to take control of an eventual 4-2 win over Eugene Metro FC.

Sam Riccardi got it started less than a minute in with a spear from 10 yards out. Then, Ginnia Nitti, Mari Fernandez and Fiona Cummings added each of their own to completely change the outlook of the game.

“We couldn’t believe what had just happen,” Eugene coach Jurgen Rockaberle said. “But that’s what really good teams can do. We learned that today – you can’t relax for a second in this competition.”

Elsewhere in U13 Boys: PDA 1999 and FC Dallas Pre-Academy led blowout trend in U13 Thursday.

Josh Burnett made the division’s most raved about goal with his picture-perfect header to the back of the net during PDA 1999’s 4-1 win over the Minnesota Thunder Academy.

“I just want to keep the intensity up,” he said. “I just want people to have to worry about me.”

Meanwhile on the field next to them, David Castillo scored twice and FC Dallas strolled past West United Pioneers (Mass.) 5-1.

“We have to keep building. It’s a long tournament,” FC Dallas coach Chris Hayden said. “We didn’t have the possession we wanted today but we knew there would be some kinks. Now we have to hash them out if we want to get where we want to be.”