AURORA, Colo. – Whether it was by an unthinkable comeback or driven by a highlight-reel performance, Friday’s outcomes at the NPL Champions Cup twisted not only the brackets up, but every coach, player and fan that experienced Day 2 at Aurora Sports Park.

Below are the uplifting and crushing highlights from the day:

Moments before goalie Anthony Drake became Friday’s hero in the Azul Juniors’ 3-2 over the Chicago Magic PSG, he looked disgusted. With a sunken head, he slumped back onto his goal line and thought his blunders would ultimately decide the outcome. 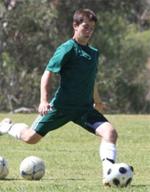 Luckily for the Azul Juniors, it was actually his leaping saves that did.

After two quick goals from the Magic’s Benson Sakala to start the second half – including one where Sakala slide kicked the ball right under Drake’s feet into the back of the net – the Azul Juniors responded with back-to-back goals in the 65th and 73rd minute before Drake closed it.

“There’s always a second chance,” his coach Gracio Brito said referring to Drake. “I got mad at him not because of the mistakes, but because he was so down about it. I said ‘bounce back’ to him. And then it came down to him late and he became the hero.”

In the clutch, a familiar face in Sakala rifled a 10-yard shot that was deflected straight back and out of bounds by Drake, before Sakala received the ensuing corner and headed it into the leaping arms of the suddenly confident keeper moments before the final whistle.

“I couldn’t believe it,” Sakala said. “He made a couple great plays.”

As for Drake, he said he was done getting down on himself.

Elsewhere in U16 Boys’ action: Four of the six games Friday were decided by a goal. One of those being a 2-1 win for the West Florida Flames 96 (1-1) against the Eastern FC Lancers (1-1) out of New York.

It was redemption for keeper Sean Caulfield, who for the second consecutive day had a brilliant game.

“I told him he kept us in both our first two games,” said Flames coach Juan Garcia whose team lost 1-0 Thursday. “He’s been at a whole different level in this tournament. He’s been outstanding.”

After Lancers’ Junior Cordeiro snuck a penalty kick by Caulfield early, Jacob Goodall and Jacob van der Luit answered at the other end with goals of their own to give the Flames their first lead of the tournament.

Later in the high-tempo contest, Caulfield made two spectacular saves – one inside 5 minutes of the final whistle – to preserve the win.

U13 Boys and Girls find its stars

Morgan Szarka’s scored with minutes to go as the Storm Copa came back from two goals down at the half to shock the Sting 3-2.

“We’ve never had a 2-0 lead and blown it. Ever,” said Sting coach Neil Blutig whose undefeated team from last season (6-0-1) gave up only one goal throughout. “They played great and we made mistakes. It’s that simple.”

Earlier in the second half, Abby Fassal cut the lead in half at the 36th minute mark and Alesia Garcia tied it in the 58th minute. Then, in the 65th minute, Sakala ended it when she took a corner off Sting’s keeper Stephanie Velez and rolled it into the left side of the net.

“We played a lot more composed in that half and it paid off,” Storm Copa coach Danny Bills said. “They are a great team so it’s a great to get a win like this.”

Danielle Devaney and Amanda Blutig had a goal apiece for the Sting.

PDA 1999 and FC Dallas both won in rout fashion as Jawon Daniels scored four times for PDA, while FC Golden State and the SC Chargers both edged their opponents by a goal.

Like his dad was as freshman in high school, James Murphy too is already being barraged by offers from Division-I colleges.

Friday proved why. He scored one goal in the first half and added another two in the second as PDA 1997 blanked the Italians 5-0.

Jalil Blalock and Jassiem Wahtuse each added another score for PDA.

“I felt pretty good out here and my teammates have been so big setting me up,” Murphy said. “I finished my opportunities. But yeah, everyone on the team has been doing that as well.”

PDA 1997 has outscored its opponents 10-0 through two games. Its coach Sam Nellins said to get to the final day of competition though, it won’t be about the PDA’s star players.  The bench is the key, he said.

“We have a lot of players that were moved up from U14 and they’ve been playing great,” Nellins said. “If they continue to do that it will help us keep building in this tournament to get where we want to be.”

Elsewhere in U15: On the other hand, sometimes it takes a little luck to stay undefeated.

FC Golden State forward Jesus Alberto Granados Gallegos deflected a ball into the net after the CFC Azul Juniors keeper, frankly, just kicked it off of him.

It was the game-winner, but not the type of win FC Golden State coach Henry Cabral wanted to see.

“He just got hit with the ball so we got a little lucky,” Cabral said. “We played flat and missed a lot of opportunities. It wasn’t good enough.”

U14 Girls has made its sides clear

Defending NPL champion JFC Elite is a little more nervous this time around. But Friday, it took the next step in repeating when they smothered NW United 2-0.

“I think we are feeling the pressure now,” JFC coach Mike Walker said. “We were kind of an unknown last year, but that’s not the case anymore.”

Mikaela McGee scored in the first half and Madison Murnin added the cushion in the second half for the JFC Elite during a mostly one-sided game.

“Our defense has been great,” Walker said. “Leila Azari has been so big with us back there along with Sophia Thompson. They have been the ones pushing us along and hopefully they’ll keep doing that.”

Elsewhere in U14 Girls: Split down the middle, the teams going to the semifinals are already set.