At first, it looked like things were about to go awry for the top U18 team at the Academy Playoffs.

A 2-2 draw in last week’s Playoff opener against Strikers FC could have derailed a talented New York Red Bulls U18 squad. Instead, the squad righted the ship, defeating Chicago Magic PSG 3-0 and Weston FC 5-1 to secure a spot at Finals Week in Houston. 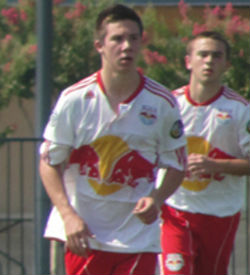 “This year, it’s so rewarding to make it back because during the season we knew that we were the number one team in the country and the target on our back was going to be huge,” midfielder Arun Basuljevic said. “We went on an undefeated streak and the target kept growing and growing, and as we got to Playoffs, everyone was like ‘this is Red Bull and we want to beat the number one team in the country.’

“So to have that target on our back the whole season and to make it back to Finals Week, in what I think is a tougher age group, the U18s, is unbelievable and it’s a testament to the amount of great players we have in this age group, and to our coach Paul O’Donnell, who is the hardest working coach that I have ever played for.”

The number one recognition stemmed not only from the team’s record in the regular season (21-1-6) but the fact that the majority of this U18 squad won the U16 National Championship a year ago in Houston.

That experience that will be valuable when the Red Bulls turn their sights on a second straight title down in Texas a few weeks from now.

“They’ve been there, they know the routine, they know the location – game, day off, game – so they know how to go through that,” U18 head coach Paul O’Donnell said. “I think it will be beneficial, fingers crossed we keep everyone healthy now and through Finals Week, because that’s important and we’ll see how it goes. Because once you get there, a lot of good teams, anyone can win, and hopefully we have enough quality to win it again this year.”

Added Basuljevic: “We know what to expect going down there, it’s going to be like déjà vu, seeing the fields, the facilities again, it feels like yesterday we won. And just to have that experience of what it takes to win. I think that’s helped us throughout the year.”

On paper, the 18s are stacked, and at Playoffs had four players signed to the first team with them: Marius Obekop, Santiago Castano, Amando Moreno and recent addition Matthew Miazga all played significant minutes to New York’s progression.

“I think the quality of this team is really 1 through 20, and the depth, we brought in a first team player, Obekop, off the bench [against Weston] just after halftime,” O’Donnell said. “It makes a difference when you have that quality, sometimes it’s a headache for me trying to select who starts.”

And while winning Academy Championships is a nice bonus, the primary function of an MLS Academy squad like New York’s is to develop and identify players for the first team. Along with the Academy training that players on the U18s get, several of them have had chances to train with the first team and play in reserve matches.

Seeing players get signed – like Miazga, Moreno and Castano – is certainly a nice thing for the coaches to see as well, as it does represent their primary job.

“It’s great, we’ve been doing this for a while and the amount of players we’ve moved up, just in this past year alone, I think is tremendous,” O’Donnell said. “We had Chris Lema who was on the 18s with us this past week and he’s a 96, he’s an exceptional talent. I think there’s more in the pipeline. These guys have to realize even though they’ve got signed, they’ve got a ways to go and the next guys are coming up that want their spot. They’ve got to realize they still haven’t made it yet, have to improve and get better and sometimes it’s just the mentality and character, hunger and desire to get better. That’s what makes a big difference.”

Those player signing then shows their teammates on the U18s that the same goal is attainable for them, not to mention sets the stage for on field success in the Academy.

“It’s unbelievable to see the guys that we’ve played with, that I’ve grown up personally playing with, to see them now with the first team, training with guys like [Thierry] Henry,” Basuljevic said. “A lot of us have been in and out with the reserves and training with them. We know now that we’re very close and a lot of us, we will, in the long run we think we do have a good chance of making it. To see guys like Amando and Santi and now my best friend Matt Miazga [sign], it’s a huge confidence-booster, morale booster, and a lot of us are very happy for them and we think our time will come.”