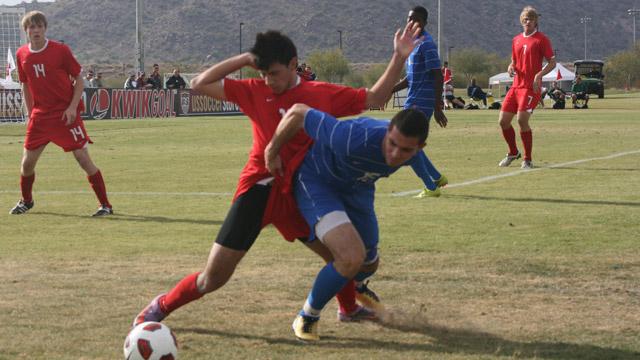 PHOENIX – Villyan Bijev was more than just a star among stars Saturday – he was a supernova.

With the best players in the Development Academy on one field, the Cal Odyssey forward stole the show during the 1992-93 Select Team match with a hat-trick that guided his Red Team to a 3-0 victory.

{mosvideo:350}Bijev netted all three goals in the first half – and in about a 15 minute stretch, no less – and likely boosted his stock in front of a crowd U.S. and college coaches, players and fans.

For Bijev, who is heading to play college ball at Washington next year, it was just an extension of his growth as a player over the last couple years.

“I went to national camps at the beginning of this year, and when I left it encouraged me to get better,” said Bijev, who has played in two Development Academy National Championship games for the Odyssey. “To get three goals is big time; I’m I was able to showcase myself.”

Bijev beat talented goalkeeper Jonathan Kempin three straight times on what he deemed “finesse” goals, while getting good feeds from teammates like Robert Botchway, a big target who was representing Concorde Fire.

On the final score, the most impressive one, he bolted through the left side of the defense and was able to flick the ball with the outside of his right foot. 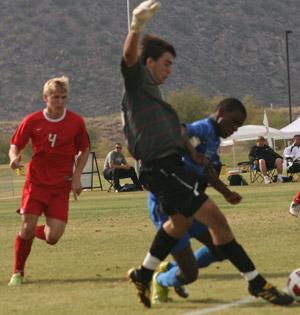 Select team players battle for the ball.
While the Blue Team was being left behind in terms of score, they were winning on style points. In particular, CASL midfielder Cooper Vandermaas-Peeler and Concorde Fire’s Jordan McCrary showed off polish and craftiness with the ball.

Vandermaas-Peeler tried on a couple of occasions to back-tap the ball for a goal – the right play at the time, believe it or not – while McCrary was magical in tight space.

One of the main things you notice when watching a collection of gifted players on the field together is the lack of wasted plays. There were few frivolous long balls sent up, it was a constant ground game, and a solid one.

In the second half, Blue Team substitutes Monbo Bokar (CASL) and Sean Okoli (Seattle Sounders FC) made a big impact and were pursuant on the attack.

Both players are supreme athletes who disrupted the Red defense with their 1v1 ability and quick decisions.

Red Team second-half goalkeeper Matthew Pacifici was under pressure in the closing minutes, and he made a great save while laying out to his right on a shot from Bokar and a follow from Ricardo Velasco.

Weston FC’s Brian James came on in the second half for the Red Team and was smooth in the midfield, taking space and advancing the ball consistently.

In the younger select affair, L.A. Galaxy’s Jack McBean scored and assisted on a second goal by Nick Tobias (St. Louis Scott Gallagher) as the Red Team took the match.

Baltimore Bays striker Michael Gamble scored for the Blue squad and had a good chance to tie it late but goalkeeper Ethan Horvath made a game preserving save.