Offense flourishes in U18 MNT scrimmage 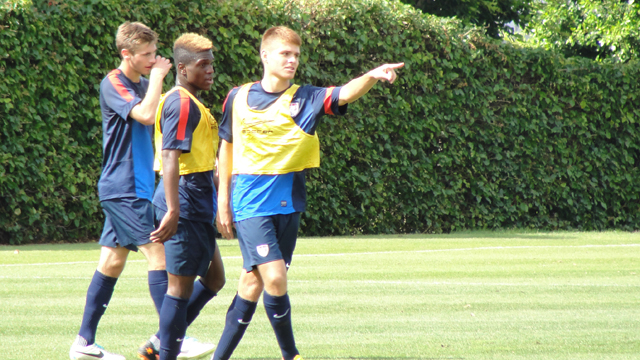 CARSON, Calif. — The U.S. U18 Men’s National began a new cycle this week with the first camp for players born in 1996 and 1997. This week’s camp features 36 players vying for a spot on the U18 MNT roster for a trip to France in October. 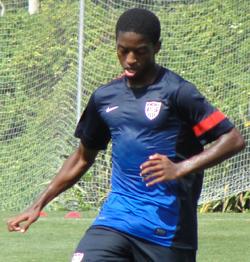 On Wednesday, head coach Javier Perez set the group up for an intersquad scrimmage that ended with the Blue Team winning 4-3 over the Yellow Squad after trailing 3-1 at half.

LA Galaxy forward Jorge Ruiz had the first chance of the game when he beat the left side of the Blue defense with his speed and then smashed a shot toward goal from the upper corner of the 18-yard box. Ruiz’s shot clanged off the post but stayed out of the net.

Blue took the lead minutes later when Sebastian Elney stole the ball from goalkeeper Jefferson Caldwell and then finished into the open net.

Yellow answered back when Chase Gasper got on the end of a pass in the 18-yard box and faced up against goalkeeper Justin Vom Steeg. The Real So Cal keeper blocked Gasper’s shot, but the rebound fell to Alan Winn who made easy work of the finish.

Yomba got rolling after the goal with two of his own over a brief period. The first came on a counter-attack after the referee ignored Mukwelle Akale’s claim for a penalty kick after he was taken down in the box. Yellow quickly moved the ball up the field and hit Yomba in stride as he burst past the defense.

The striker finished over the shoulder of Vom Steeg for his first goal of the half.

Minutes later, Shaq Moore slotted the ball in between the two center backs for Yomba who placed his shot past Vom Steeg for his second of the game.

The second half featured a number of changes for both sides as the coaches wanted the opportunity to look at every player on the roster during the scrimmage.

Blue took control of the game in the second half thanks to the domination of the midfield via Akale, Abuchi Obinwa, and Christian Lucatero.

David Villegas claimed the opening goal of the second half off an assist from Sebastian Saucedo. Villegas received the ball out on the wing, cut back in onto his left, and then buried a curler into the upper corner of the net.

Akale got to work after the goal. He scored his first of the game two minutes later when he beat Conor Donovan and Tommy Redding on cross from Brooks Lennon for a goal, which he headed in.

“First header [goal] ever, and for it to be with the national team is just great,” Akale told TopDrawerSoccer.com. He added that it was a nice bonus to get it over some of his friends from the Residency Program.

Two minutes later, Akale scored his second when he stole a pass and hit a driven shot from outside the box that tucked into the corner of the net.

“I saw where Elijah [Martin] was going to take a touch so I just stepped in front,” Akale explained. “Brooks [Lennon] was making a run so he pulled the center back away and I just had a shot.”

Akale’s two-goal performance stands out on a day where the offense was the highlight of the day. Coach Perez said that the attack has been the focus of the camp through the first few days.

Perez said that he was pleased with what he saw on Wednesday, and encouraged with the group moving forward.

The team returns to training tomorrow and then prepares for scrimmages against a couple local teams on Saturday.