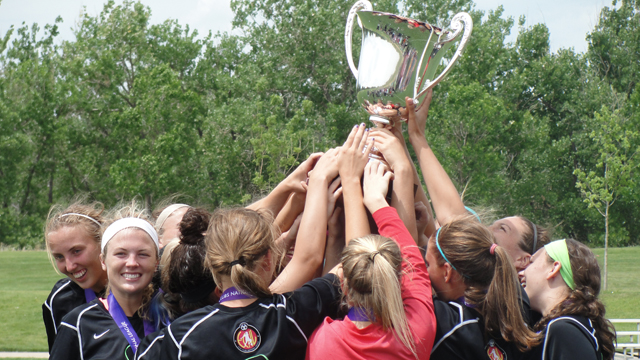 AURORA, Colorado – Ohio Premier Eagles’ journey started on grassy fields in Ohio nine years ago. On Monday, it ended with triumph over 1,200 miles away.

The humble, hardworking squad from the Buckeye State topped local, star-studded side Colorado Rush 1-0 in a gripping U18 ECNL National Championship game.

Ohio(w) commit Alexis Milesky scored the game-winning goal off an assist from Toledo commit Brooke Maletic. The sequence started with a deft piece of footwork from Lindsay Agnew, who had a sublime four-game run in Colorado, that broke the pressure of the defense and circulated the ball from right to left.

Maletic eventually ended up with possession 25 yards from goal sitting near the center of the field. The winger picked out Milesky’s run and put it right on her foot. The striker converted the effort to the inside of the far post despite Rush defenders falling all over her.

Rush pushed everything it had left in the tank into the final 30 minutes of the contest, but OP Eagles’ goalkeeper Anna Rosa James was spectacular in net and came up with a handful of mesmerizing saves on the way to the shutout.

In front of her, center backs Katherine Mazurek and Makenzie Costner closed off everything down the middle. Left back Cara Ledman was one of the unsung heroes with her effort in eliminating any opportunity for the Rush. Right back Chiara Paradiso was equally as convincing on the opposite side, which frustrated the local side that had not been held scoreless since February 24.

OP Eagles head coach Chris King said during the trophy ceremony that his squad was not the most talented in the country, but it had the most heart and that is why they were lifting the hardware while others watched.

King’s modesty barely tells their success story, as his squad was tactically on another level than most of the competition. With a quick moving formation that morphed seamlessly from a 4-5-1 to a more offensive 4-3-3 when they gained possession, Eagles presented problems defensively that most teams could not handle or had not seen executed at that level before.

Kaitlin Miller, Bailey Wilson, and Emily Geyer, the midfield trio that understood their roles to perfection, won the battle against youth national team players in every game in Colorado and were a huge component to the team’s success.

In the attack, Agnew, Milesky, Maletic, Kelli Hubly, Donavan Capehart, and Samantha Edwards rotated among roles in the attack during the extended weekend and all contributed in some facet to the eight goals scored in four games.

In the truest sense of the phrase, it was a team effort that took this team from the field of Ohio nearly a decade ago to the top of the mountain as the best U18 girls club soccer team in the country. A trip that was worthy of a champion, indeed.

Earlier in the day, OP Eagles and Colorado Rush had to finish off their semifinal fixtures after a storm delay prevented the contests from ending on Sunday. OP Eagles used a goal from Agnew shortly after play resumed to knock off two-time defending national champion CASL 2-1. Colorado Rush scored late in the contest to push past TSC Hurricane 3-2 in the other semifinal.

The other age groups also faced the challenge of rescheduled games for Monday morning. Slammers FC did not appear to let the weather hampered their parade, as the Southern California squad defeated Eclipse Select Soccer Club 3-1 to clinch their spot at the National Finals in July.

Sereno Soccer Club defeated Michigan Hawks 1-0 on Monday to win Group A and grab the trip to Richmond, Virginia and extend its season. So Cal Blues benefitted from a forfeit and won Group B with a perfect 3-0-0 record.

FC Bucks played to a 1-1 draw with Freestate Soccer Alliance, which was enough to send Bucks through as the Group F winner. Dallas Sting completed Group A play on Monday without giving up a goal in any of the three games. Sting defeated Santa Rosa United 1-0 and moved on to Richmond as the group winner.