Comments
Welcome again to Players To Watch. Here are the Top 20 2012 Boys from the Rocky Mountains and Southwest:

Maikon Orellana of La Roca Premier is a forward for the Region IV team. Born in El Salvador, he’s quick and dangerous with the ball at his feet and loves taking defenders on. He’s a dynamic final option up top.

Matt Gay, currently in National Team Residency, is a big, strong target forward with an accurate shot and great ability in the air.

Forward Richard Haddock is a powerful runner with good technical skills and lateral agility and a natural nose for the goal.

Parker Dixon is a hard-working holding midfielder with great technique and high soccer IQ. He always seems to be around the ball and is a good stop-plug in the middle of the field. 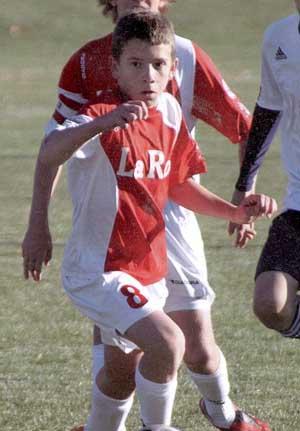 A player from La Roca Premier.
Riggs Lennon is a forward in residency with the National Team, but for Sereno SC he is the prototypical modern left back: good defensive instincts and the ability to attack with pace along the flank.

Cole Nagy is an attacking midfielder we expect to see on the Canadian National Team sometime soon. He’s not big, but he’s tough, plays with both feet, has a great attitude and a good competitive drive.

Kyle Jackson is a goalkeeper with all the tools you look for: size, strength, agility and full ownership of his box. He’s very mature for his age and relishes his leadership role on his Sereno SC team.

Angel Rascon is a target forward with great strength who holds the ball up and puts a ton of pressure on the defense. He’s quick, has good technique for his size, and is attracting attention from some professional clubs in Mexico.

Akio Okhato-Gordon of Colorado Rush is a very energetic, demanding forward with great technique and the ability to score from anywhere on the field. He combines well but also excels on the dribble. He must improve his tactical understanding, but he’s learned very quickly since joining the Academy a year ago.

Martin Shamala is a physical and versatile player who can play outside back, on the wing or up front. He is confident dribbling the ball and delivers dangerous crosses and shots on goal, but he needs to work on becoming more consistent.

Jesse Ham of Real Colorado is a small and quick attacking midfielder with good technique who has a knack for finding balls in the box. He’s got good instincts and is surprisingly strong in the air.

Jacob Martinez is a crafty attacking midfielder with good distribution skills and quickness with the ball at his feet.

Taylor Hunter is an athletic center back with good speed and strength in the air. He’s a very solid defender, but he needs to get more assertive in his communication on the field.

Karsten Hanlin of Colorado Rapids is an athletic, ball-winning holding midfielder who does the job of winning possession for his team and distributing to keep the ball moving.

Axel Fleischli is a very hard-working, scrappy type of forward who always seems to be around the ball. He’s an opportunistic goal-scorer.

Dillon Serna is a tricky left-footed winger who likes to play underneath the forwards. He’s very technical and puts defenders on a desert island when he comes at them with the ball.

Central midfielder Irvin Gijon of Players SC and the U17 National Team is a playmaker with excellent ball skills who plays a very physical, but technical and intelligent brand of soccer. He has a very bright future ahead of him.

Edgar Nava is an undersized left-footed forward who can take over a game with great quickness, ball skills, and a deadly-accurate shot.

Anthony Clark is a player with great size who can play anywhere in the central midfield or defense. He’s very physical and technically proficient, is strong in the air and tackles well. He’s intelligent and a great presence in the middle of the field.

Brian Gutierrez is a player from Argentina with great technique. He moves well and has good timing on his runs, and is a handful even though his temper sometimes takes him out of the game.
Related: Players To Watch,
Headlines
Club Rankings HQ
View all rankings >>