Orrin Gaines on the path to U.S. stardom 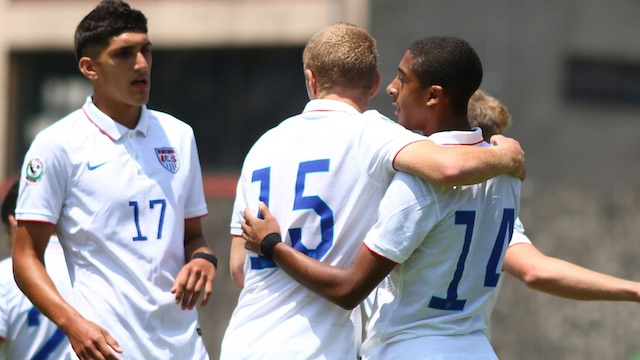 This particular U.S. U17 Men’s National Team cycle has been a professional incubator. When Daniel Barbir signed a pro contract with West Bromwich Albion on April 17, he became the seventh player from the 20-man 2015 CONCACAF Championship roster to become a professional. That’s the highest ratio in U.S. U17 history.

So when explosive U.S. U17 winger Orrin Gaines flew to Germany at the end of February to spend a week and a half training with Wolfsburg, it wasn’t idle work. After all, teammate Christian Pulisic had just finalized his contract with Borussia Dortmund just a few hour’s drive away.

Gaines impressed his hosts, so much so that he said the club is “really interested” in folding him into their youth setup. But because he isn’t 18 and doesn’t have an EU passport, he can’t legally join the club, or any in Europe, until March 2016. At the very least, that gives Gaines another year to make an impression on the national team and continue his work this semester at U17 residency in Bradenton, Florida.

As for the experience in Germany, Gaines thinks he did enough to leave an impression. He split his time between Wolfsburg U19 and U17 teams, where he stayed with Wolfsburg’s top prospects in their dorm.

“The trip was really successful,” said Gaines, who plays with Austin, Texas academy Lonestar SC. “It went really well. It was a really good atmosphere, a really good place.”

This spring marks Gaines’ third consecutive semester at residency, which helped launch a U17 career that took him to the CONCACAF Championships in Honduras earlier this year. He’s a likely pick as a speed injection off the bench for the U17 World Cup in Chile later this year. Considering all four starting attacking players - Haji Wright, Joe Gallardo, Joshua Perez and Pulisic - either currently are or have been installed in professional systems, starting spots for talented wing players isn’t exactly in ready supply on this loaded roster.

Global interest in Gaines has steadily been rising since he broke out with a masterful performance in the Development Academy Showcase Game in Florida at the end of 2013. Gaines was arrayed on the right flank and turned in one of the best performances of his career in front of a bevy of scouts and talent evaluators. Earlier that year, Gaines sustained an injury to his hip, which put him on the shelf for five months. Worried he’d lost a step from his incendiary speed, Gaines spent the better part of the fall returning to form.

The showcase game was his first big stage to show the rest of the country he was 100 percent. And he didn’t waste the chance.

“Looking back, that was definitely a big moment,” Gaines said. “That was probably the moment that was, as you could say, a breakout moment.”

Gaines made a few youth national team camps before his injury early in 2013, but his performance at the showcase revived U.S. Soccer’s interest. Less than a month later, in January 2014, he was called into his first semester at U17 residency at the age of 15. He’s been a fixture in every residency roster and in just about every U17 camp since. Only Wright made more appearances with the U17 national team in 2014.

“It’s really inspiring, playing against players from all over the world and proving you can play with them and hold your own,” Gaines said. “That’s something that inspires me to be better every day. Right now I just have to keep working as hard as I can every since day, and hopefully I can reach my dreams.”

For now, Gaines continues to seek professional avenues. He said he’s never been approached by the academies from FC Dallas or the Houston Dynamo, each of which is about a three hour drive. Since Lonestar isn’t hooked into a pro pipeline, that leaves Gaines open to pursue every possible avenue. And that could mean the college route when he graduates from high school in 2016. On that front, he said Clemson, UCLA, Saint Louis and Oregon State are all front-runners so far.

But Gaines wants to play pro. With the U17 World Cup approaching and a new U18 cycle cranking up at the end of the year, anything’s possible for one of America’s most promising wingers.

“I want to be a pro. That’s pretty much the end goal,” Gaines said. “But if the right contract doesn’t come around, then college is still the number one option. But if I can find the right contract, then going pro is what I want to do.”