Here is our Players To Watch Team of the Month for the New Jersey Region. 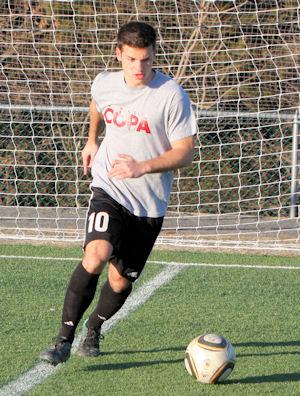 Joe Saitta
Justin Yacovino, Soccer Domain FC Gauchos, U15, Central Midfielder: Justin Yacovino, is one of the newest players to the Soccer Domain FC Gauchos U15 squad, but it didn’t take him long become a major contributor to this dominant New Jersey team. Justin’s technical skill, creativity, and field vision created numerous chances for the Gauchos attack during their State Championship run.

Connor Marino, Next Level Soccer Academy U18 Thunder, Central Defender: Connor is committed, natural athlete with a passion for the game and developing as a player. Connor, the anchor of the Thunder’s defense, has an outstanding work ethic and can be seen always with ball working on his skills. Connor is a member of the 2011 recruiting class for Head Coach Dan Donigan at Rutger(m)s University.

Joe Saitta, FC Copa Forza U18, Committed to Princeton, Central Midfield: Joe is the attacking center midfielder for the three-time New Jersey Youth Soccer State Champion FC Copa Forza. He is an incredibly consistent, technical player with great game intelligence. Joe is a commanding presence in the midfield and excellent distributor of the ball providing Forza with many beautiful assists including a goal that took them to the 2011 U18 New Jersey Youth Soccer National Championship finals.

Matthew Berman, FC Copa Forza U18, Defensive Midfield: “Matty” is the quintessential coach’s son, though he possesses a natural leadership ability, when presented with a tactical plan he not only executes it flawlessly, but leads his team to do the same. Matty and the Forza defensive line completely shut down the opposing center midfielder in the 2011 New Jersey Youth Soccer National Championship game showcasing their dominance as a unit in the 4-0 final scoreline. Will play college ball at Rutgers.

Ben Strong, FC Copa Forza U18, Center Midfield/Forward: Ben Strong, continued his passion for excellence producing over half the goals for FC Copa Forza U18 in their run to the 2011 U18 New Jersey Youth Soccer National Championship. Strong leaves to begin his soccer and scholastic career at Virginia Tech having assisted the FC Copa Forza U18, to three consecutive trips to the Dallas Cup and Disney Classic, from 2008-2010 and three state championships at U13, U14 and this year at U18 and having garnered many honors at the high school level.

Kevin Motylewski, FC Copa Forza U18, Mendham, N.J., Goalkeeper: Kevin Motylewski’s goalkeeping skills were at their finest as FC Copa Forza U18 men posted a 4-0 shutout in the final for the U18 New Jersey Youth Soccer National Championship. Although Kevin missed parts of his 2010 High School season due to a leg injury the powerful Motylewski is obviously back to fine form with his club and will certainly add depth and be a strong candidate for the starting job at Lehigh.

Austin Lenart, NJSA 04 95’s, U15, Forward: Austin is the textbook example of the “coachable” player. He is a consistent and technically skilled player with great field vision and game intelligence. Austin is continuing to have an extremely productive season contributing several big goals in big games during NJSA 04 95’s run to the 2011 Northeast Pre-Academy League Cup Championship.

Alex Ramos, NJSA 04 95’s, U15, Forward: Alex’s athleticism and creativity provided many “highlight reel” moments during NJSA 04 95’s 2011 Northeast Pre-Academy League season. Alex scored off of a bicycle kick in each of the three games against D.C. United’s U15 Academy side among several others during games this season. Alex certainly brought a “flash of magic” to his talented team and the highly competitive Northeast Pre-Academy league.

Jordan Black, NJSA 04 95’s, U15, Goalkeeper: Jordan, the keeper for NJSA 04’s U14 squad was called up to duty when the U15 keeper was injured just before the quarterfinals of the Northeast Pre-Academy League Cup. Jordan’s performance during the quarterfinal game was nothing short of amazing as he shook off the nerves and made several outstanding saves giving up only one goal and assuring the NJSA 04 95’s their spot in the semi finals and the eventual Cup Championship.

Jared Goldstern, NJSA 04 95’s, U15, Defender: This season, Jared Goldstern proved himself and the depth of the NJSA 04 95’s squad. After an injury in the back, Jared came off the bench and provided the squad with outstanding defensive performances showcasing not only his individual talent to shut down offensive players 1v1, but also showed his ability to quickly adapt and succeed in NJSA’s defensive game plan. Jared’s skill as a “one man wall of defense” earned him a spot in NJSA 04 95’s the starting line up for the balance of the Pre-Academy League season.

Lauren Donato, NJSA 04 Power U14, Midfielder: Lauren has always been a solid contributor for the NJSA 04 Power, but this has been a breakout season where this versatile player with “the heart of a lion” has shown great bravery, excellent decision making skills and creativity to provide the Power with big goals in big games.

Jessica Vigna, Match Fit U15, Midfielder: This holding midfielder was a bundle of energy with a good soccer brain at the Region I Premier League playoffs and the New Jersey State Cup. A tireless worker. 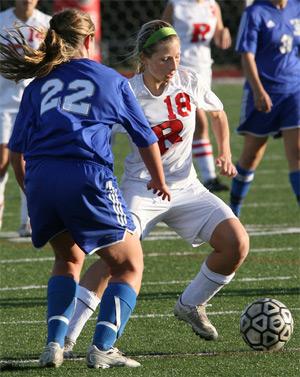 Carly Setaro
Kerry Glynn, Jersey United Thunderbolts U18, Old Bridge, NJ, Defender: Has been with the team for six years and is regarded as one of the most dynamic and creative fullbacks in New Jersey girls soccer. Kerry’s international experience with the U17 Irish National Team that competed in the 2010 FIFA U17 Women's World Cup provides the Thunderbolts with added versatility and big game experience. Kerry will take her explosive game to the University of Vermont.

Amanda Jones, Jersey United Thunderbolts U18, Winger: Committed to Charlotte, Amanda, always an outstanding player at left mid, hit her stride in the past few months terrorizing opposing defenses with her blazing speed and goal scoring ability to assist the Jersey United Thunderbolt’s run to the 2011 New Jersey Youth Soccer National Championship. Amanda will continue her soccer and scholastic career at UNC Charlotte.

Meghan MacDonald, PDA U15, Central Defender: A stalwart in the back for the State Cup winners, Meghan also highlighted her month by committing to Boston College as a 2013 grad.

Jackie St. John, World Class FC U15, Oakland, NJ, Defender: Jackie is a standout in the back line and already has been invited to U.S. Soccer Market Training.

Catrina Atanda, PDA U16: Her good play, including helping her team to a State Cup title, has helped her get acallup to the U17 Women’s National Team.

Andrea Ricketti, Next Level Soccer Academy Legends, U18, Central Defender: Andrea is superior defensive talent for Next Level Soccer Academy U18 Legends and the Pennington School where her efforts assisted in Pennington capturing their eighth straight NJISAA Class A state championship with a 1-0 win over Peddie. Not only a great defender, she is an outstanding leader as the captain of her club and high school and displays talent on the pitch as well as in the classroom. Andrea is committed to the University of Scranton to play women’s soccer.

Carly Setaro, Next Level Soccer Academy Legends U18, Midfielder: Carly is a player who flies under the radar until she takes the pitch. It doesn’t take long for opposing players and coaches to recognize and respect her talents as a superior ball distributor and poised leader who lets her control of the midfield and ability to connect with the Legends attack do all the talking. Carly is looking at a number of colleges to continue her education and soccer career.

Hannah Steadman, Jersey United Thunderbolts U18, Goalkeeper: Hannah stepped in goal a few years ago after the starting goalkeeper sustained an injury and she’s been sharing duties in the net ever since. During the Jersey United Thunderbolt’s 2011 New Jersey Youth Soccer National Championship run, Hannah continued to display her skill as a strong and vocal leader of the Thunderbolt’s defensive efforts as well as showing her composure and foot skill passing out of the back.

Daphne Corboz, PDA U18, Forward: Club had no U18 State Cup entry so she helped U19s win. On her way to Georgetown.

Amanda Visco, NJSA 04 Power U14, Midfield: Amanda is the team captain of the NJSA 04 Power led her team to the 2011 Region I Colonial League Regional Championship where the Power beat LV United 96 3-2 in the final. Amanda is a great leader who can both attack and defend and has Region 1 ODP pool honors to her credit.

Cassidy Benintente, PDA U17, Forward: A Rutgers commitment who helped her team with a number of goals in State Cup-winning run.

Halley Cartas, NJSA 04 Power U14, Defender: Halley possesses game intelligence allowing her to lead the NJSA 04 Power’s defensive unit in unison stymieing the oppositions attack. Halley’s direction in executing the off sides trap helped the Power to a 5-1-1 record in the Region I Colonial League. Halley excels in winning the ball, and from there exposing gaps and initiating the Power’s attack.