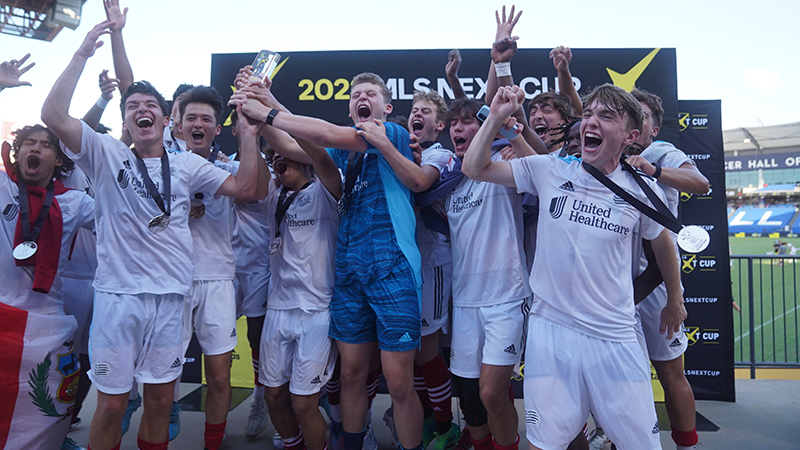 The 2021-22 MLS Next season officially came to a close on Sunday, as the U17 and U19 finals took place in Frisco, Texas.

Check out a mini recap of each game below.

Thanks to goal on either side of the halftime break, Columbus Crew looked in control of the Under-17 MLS Next Cup final.

A penalty from Taha Habroune and an early second half finish from Joshua Bartels had Columbus up 2-0 50 minutes in to the final versus Philadelphia Union.

As he has all season, Marcos Zambrano-Delgado scored some big goals to lead the way. Zambrano-Delgado pulled one back for the Union in the 55th minute, heading home from a corner kick. David Vazquez tied the game.

Six minutes after that, Philadelphia had the lead for good, and Zambrano-Delgado had a brace. One year after a few of these players lost in the U15 final to Real Salt Lake, this time they rallied to win it all.

U19: Revolution hang on against San Francisco Glens

In what was a final hurrah for several players on both teams, the New England Revolution secured a 1-0 victory to win the U19 MLS Next Cup crown.

Georgetown signee Jack Panayotou’s last game at the club level saw him score the winning goal seven minutes into the game. Excellent work down the left win by Triton Beauvois saw him beat the opposing defender to the end line. Beauvois cut the ball back to the penalty spot, and Panayotou slotted home the game's only goal.

While San Francisco had a couple of looks for the equalizer, New England was just as threatening for the rest of the game. Beauvois had a goal called back for a tight offside call, and goalkeeper Lucas Jones kept it a one-goal deficit for the Glens with a handful of impressive saves.

In the end, New England held on to hoist the trophy.

How the U-19s became MLS NEXT Cup Champions: pic.twitter.com/rNSTEpC9Ho