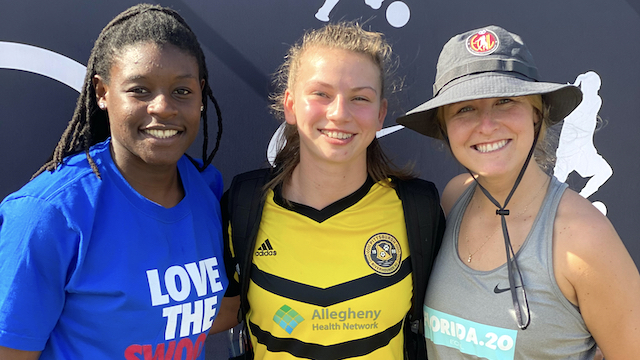 Pittsburgh Riverhounds and North Carolina(w) commit Tessa DellaRose recorded a journal during the ECNL National Event in Florida. She shares her experiences from the three-day event below including playing in the National Selection game on Friday night.

Today was the start of ECNL Florida. My teammates and I cannot be more excited to get out on the field to play. I will be participating in the National Selection Game this evening so I will not play with my team [Pittsburgh Riverhound] today. I started off the day with breakfast with my family. After breakfast, I went back to the hotel and did dynamic stretches and a light workout for activation. I hung out with my teammates for a while then headed over to Seminole Park. I visited the Shoebox, of course! I also got to meet ECNL and UNC alum Ru Mucherera! It was so great to meet Ru. She is so awesome! We talked for a long time actually and she was so open to answering all our questions and we had a lot!

My team took the field at 1:45 p.m. Since I could not play, I went to cheer them on which must have worked because we won! After the game, I ate a light lunch and started to prepare for the National Selection Game. I was so excited to play alongside some of the nation's best! I was also excited to see coach Jason Dewhurst. He was a coach at the ECNL National Training Center in Portland in July. I played on his team in our games out there.

The Selection game was so awesome! The atmosphere was amazing! There was so much cheering from teammates and parents as well as college coaches filling the sidelines! I loved it! Every single minute! It was such a great experience. My Riverhounds teammates made signs for me and I could hear them cheering during the game. I knew that my club coaches were there too so it added to the experience of representing my club, my team and my coaches. The competition and talent were at an incredible level. Playing among the best only makes me better. My primary position on the field is a forward as a left winger. But on Friday, I played outside back. My coach assigned me that position and I was more than happy to play there. I love being a forward, but being an outside back is just as exciting. I will play in whatever position helps me contribute the most to my team! And if coach Dewhurst put me in an outside back position and left me there for 80 minutes, I was going to own it! After the game, I met up with Ru again and we did an interview together. I probably talked a little too much but she is such an amazing person and did not seem to mind!

After leaving the field for the night, we picked up some recovery food and headed back to the hotel. I need some rest for another big game tomorrow! Today was Day 2 of ECNL Florida and I was back with my team! Before leaving our hotel, I did my light activation workout. I ate breakfast with my parents and then we went over to the fields. We played an early game this morning and pulled out another win! After the game, my teammates and I used my GoPro to do a “post-game recap” as a way to remember the season and all the things we did as it progresses. Since we won our first two games, as a Pittsburgh Riverhounds tradition, we get to wear our yellow socks for the last game. We wear our yellow/black jerseys, black shorts and yellow socks. It's always exciting when we get to wear yellow, black, yellow because we know that we earned it! We are wearing them out this season!

After the game, I stayed at the fields to watch my friends play and to catch up with them after. It's always so nice to see friends from around the country and reconnect as well as meeting new ones. The ECNL provides a great platform for not only soccer, but also for making memories and new friendships! The sisterhood is real!

After leaving the fields, we ate and went back to our hotel. Later, as a team, we took a walk, stretched, and jumped into the freezing cold pool for recovery! Then, we all went back to our rooms to relax for a while. I took the remainder of the night to rest and prepare for our last game of the showcase. Today was the last day of the Showcase and my teammates and I were pumped for our last game! I woke up, went to breakfast, then to church and back to the hotel to check out. Before checking out, I completed a light activation workout in the hallway. Our check-out was at noon so we had some time before I had to head over to the fields. We met one of my teammates and her dad for a quick snack. We knew that the Riverhounds ECNL U18/19 team was playing before us so we decided to catch some of their game. We headed over to the fields and stopped by The Zone for some last minute pictures and fun! I met up with Ru again to talk some more before the weekend was over. Hopefully, other athletes took a minute to meet her and ask some questions.

Our game started at 3:45 p.m. It was a battle from start to finish but we pushed through to secure another win! We celebrated our 3-0 weekend with a post-game recap and then hurried to the airport!

ECNL Florida was above and beyond what I imagined. I had an unbelievable weekend! The atmosphere and energy that every player, as well as the league, brings to each showcase is exhilarating! The competition is next level and the amount of college coaches that attend is something I have never seen playing anywhere else. I had a great time with my teammates and friends. ECNL Florida kicked off 2020 on the highest note!