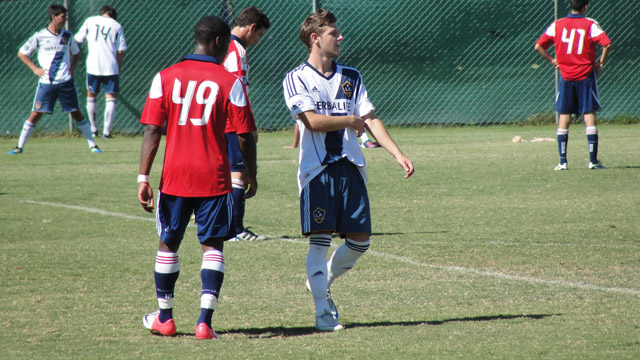 Chivas USA claimed the three points in the U16 game with a 2-0 victory. Caleb Calvert and Daniel Crisostomo found the back of the net to give the Chivas USA U16s their first win of the season. 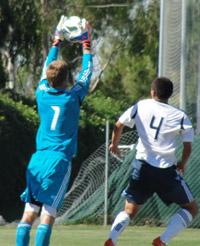 Chivas USA's GK makes a save.

While the split results had both Academies taking away positives from the day, it was the players on the field that really represented the direction these two clubs are headed.

U.S. U18 Men’s National Team forward Paul Arriola is one of the new faces to the Galaxy Academy this season. The former Arsenal FC standout made his Galaxy Development Academy debut on Sunday.

“The guys are really warming and welcoming [plus it is] the ability to interact with the first team and reserve team,” Arriola said about what brought him to the MLS academy. “Galaxy is one of the best programs in the United States right now.”

Galaxy U18 head coach Eddie Soto cited the success of the first team in helping to attract players to the youth teams.

“It should be,” Soto replied when asked if this was the place to be for the top youth players in Southern California. “LA Galaxy is the premier team. We obviously want to have the best players and create the best environment for future players with the first team.”

Chivas USA may disagree with that assessment especially at the youth level with its U16 team containing a roster of eight U.S. youth national team players [two of those players are in the Residency Program currently].

“It is always nice to get one on the Galaxy,” Chivas USA U16 head coach Mike Munoz told TopDrawerSoccer.com after the 2-0 win. “I was happy that Galaxy was the first game after Real Salt Lake AZ [a 7-2 loss for Chivas USA] because I knew we would get up for this game.”

Ironically, it was two former Galaxy Academy kids who did a lot of the damage on the day for the Red and White. Winger Alejandro Vergara provided the assist on Calvert’s goal while center midfielder Axel Mendez bossed the proceedings.

“We knew [Galaxy] would come out gunning for them to prove they should be playing over there, but at the end of the day, they both played very well,” Munoz added. “They are very good players who rise to the occasion.”