The Elite Clubs National League kicks off this weekend, and in accordance with the big occasion, some of TopDrawerSoccer.com’s staff decided to take a look at the impact player’s in the elite league for girls club soccer.

Below is a list of 20 players (in no particular order) who will be difference-makers for their clubs in the upcoming season, relying heavily on our rankings of the Top 150 players across a variety of classes across the nation. Some of the players will miss a chunk of the season while on World Cup duty with the U.S. U17 WNT.

The tenacious midfielder is also captain of the U17 WNT and will miss some of the season at the World Cup in Azerbaijan. But the Notre Dame-bound talent is certainly in for another big year in the ECNL, as she provides steel in the midfield and a tremendous passing range.

McCoy, the top-rated player from the class of ‘15, is an extremely influential talent who can dominate games in the middle of the field, and a player who has been on the radar for various U.S. youth national teams. 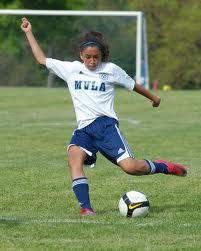 One of the nation’s top goalkeepers in her age group, Tompkins will look to back stop her Sereno side to a successful year, while also maintaining interest from the U15 GNT.

An exciting attacking midfielder, Huster can hold her own with any of the best midfielders in the country of her age group. Posted solid numbers in the ECNL last season, with close to double digits in goals and assists.

The defender, who mostly plays as a center back, possess strong leadership and offers a vocal presence at the back. That’s without mentioning her defending abilities are top notch.

A forward who can score in a variety of ways -- combining with teammates, taking on defenders, getting on the end of chances -- Dowd is on her way to Boston College in 2013 and will look to cap off a strong ECNL career this year.

The top ranked player in the 2016 class did not get there by accident. Pugh is a gutsy attacker who loves to beat defenders on the dribble. With her combination of pace and skill, she normally comes out on top in any individual battle. She scored 11 goals and contributed 7 assists in 11 ECNL games last season for her club. The 2.63 points per game average is closer to the floor than the ceiling for Real Colorado’s star.

Unstoppable. That is how most coaches describe Westendorf and the GSA U16 ECNL attack. The skillful target forward decimated defenses last season with 29 goals in 20 games. She has duplicated the effort on the international level with the U.S. U15 Girls National Team. The Alabamian is set for a big year at both the club and national team level.

Stevens is the other dynamic part of the GSA attack (along with Westendorf). They both have flourished at the club and national team level, which is a compliment to coach Campbell Chapman and the rest of the staff at the Georgia club. Stevens is the maestro of the team who pulls the strings from an attacking midfield role. She is smooth on the ball and swift to pick apart a lazy defense.

KCFC merged with BVSC in the offseason, but the expectation is much will be the same for the successful KCFC U16 squad. The Kansas club scored 69 goals in 17 games last year, and much came thanks to the midfield play of Dorian Bailey. With a motor that never seems to slow down, Bailey darts around the field to be that linking pass from defense to offense or to switch the point of attack. The U15 GNT standout is a crucial piece of the puzzle for Sporting’s success and is definitely one to watch in the ECNL.

It does not matter what position you play Mary Alice Vignola on the field, she will be successful. With a burst of pace that can set her apart in any foot race, Vignola is a valuable weapon on the wings on even up top. She played outside back with the U14 GNT at the most recent camp and fit in swimmingly there as well.

One of the younger players on the U17 WNT, Sullivan is a Stanford commitment who also played for the D.C. United Women this summer. Her experience will prove valuable this year -- when she’s able to play -- for her club side.

The North Carolina commit is a handful for any defense. Buckingham makes great runs that requires defenders to always account for her presence. In the first moment of weakness, she is quick to pounce. The Hawks club has done well developing next level talent, and Buckingham looks like the next in the line to take the spotlight.

Kaskie is one of the most creative players in the ECNL. The Las Vegas-native is always looking at ways to push through the defense and spring the attack. Her diverse skillset earned her a spot on the U17 WNT for the World Cup and, arguably more impressive, a spot on this list. The UCLA Bruins coaching staff should be eagerly anticipating her arrival in 2013.

The outside back from Northern California has shot up our Top 150 National Player Rankings since her impressive showings with the youth national teams. Now, the expectation is on her to continue that form at the club level in MVLA’s first season in the ECNL. McGrady is a two-way player with exceptional athleticism.

Harvey, a lively striker, has been an impact player in the ECNL for the past few seasons. Her Texas club has enjoyed a very successful run in the nation-wide elite league, as well, and Harvey has been the focal point of the attack. The Texas A&M commit scored 15 goals last season.

The Southern California talent was, unfortunately, the last player cut from the U.S. U17 WNT World Cup roster. The Berkeley-bound attacker will be playing with a chip on her shoulder this season. With her burst of pace and nose of the goal, Ship should easily surpass the seven goals and six assists she contributed last year.

A tenacious as a pit bull but as composed as a poodle, Malatzky is a rising star on the national level at the center back position. The Slammers product looks like a natural born leader on the field.

Described as “very athletic” and “one of the fastest players in the region,” Wagner is a difference-maker on the field. She has great composure in front of the net and is expected to be in the mix among the top scorers in the nation. Although only a sophomore, the forward has already given her verbal commitment to Oklahoma State.

Flippens is an athletic center midfielder who takes control of the game from the opening whistle. Her stats are not eye-opening (two goals, one assist in 18 games last season), but watching her play is awe-inspiring. She covers a ton of ground and contributes plenty in both the attack and defense.