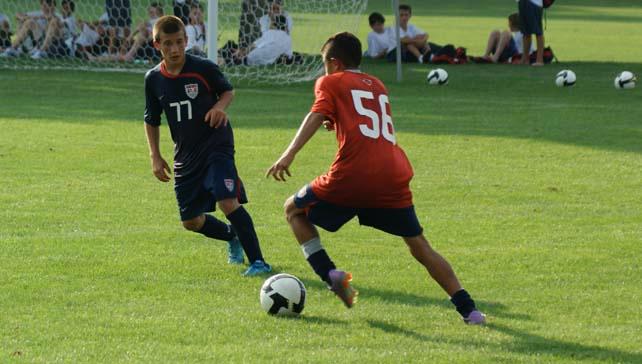 While all three matches played in the afternoon heat at Middlesex Prep School were under close scrutiny from Manny Schellscheidt and the cadre of national staff coaches on hand for the event, the Pool Match definitely had the singular attention of coaches and other players alike as it was played after the other two games had been concluded.

While this in itself is not a new feature at the long-running annual camp, featuring 1997 birth year players this year, what is a new feature is the large number of players invited to the camp via the USSF Development Academy scouting network, led by USSF’s Tony Lepore, who has been on hand here as part of the staff for many years.

Lepore said 20 of the 120 players on hand were scouted through national staff, with Schellscheidt giving the go-ahead for that many players to be included in the camp along with the 100 chosen through the more traditional U.S. Youth Soccer Regional ODP training camps held in the summer.

Lepore says to expect more of the same moving ahead. 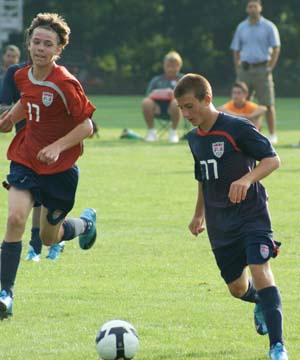 Brendan Constantine (77) and Donald Emerson (17) battle at Concord.
“There are plans to have a bigger impact, not just for this age group but throughout Zone One (younger age groups). The technical advisors have better coverage, especially in the key markets. We are going to continue to expand the network. The per diem scouts are important not only for being at academy games but for being on the ground with the clubs in their area,” Lepore said. “For this age group, we think we’re going to find a better group of players with the help of the Market Training Centers (day-long training sessions for an elite group of invited players in specific age groups at various places around the country). We did that as a pilot in year one, just finished with year two where we did more, but not enough, and it was mainly focused on the Academy. We’ve always said kids outside the Academy were welcome too but we’re going to branch out more, especially when we’re looking at younger age groups because we don’t have Academy for them. The Academy clubs are still a good starting point for those, just because that’s where a lot of the good kids are heading, but there are a lot of kids outside the Academy where we can have the Market Training Centers in the key markets and include clubs outside the Academy. It will be all inclusive. We’ll look at how that is working out and see what we might want to do differently in the future.”

As far as the present goes, here are the lineups and some details from the day’s matches.

Pool Match: Team Five 3, Team Six 3
This turned out to be one of the better games of soccer that I’ve seen this week. Cameron Lindley of Carmel United was pulling the strings early for Team Five, hitting a couple of cracking shots that Team Six goalkeeper Christian Herrera of Striker FC in New Mexico did well to turn out.

Team Six then responded with a couple of chances of their own. Dylan Smith (Fullerton Rangers)  set up Christian Locatero (Houstonians) for a shot that was kept out by Team Five goalkeeper James Marcinkowski of Mustang SC. While Team Six winger Caleb Moore of Discovery SC in South Carolina is a powerhouse winger with a ton of speed, Team 5 defender Max Stiegwardt (Minnesota Thunder) showed himself more than up to the task,  keeping tabs on the speedy forward all through his shift.

Northshore United’s Amadu Kunateh and Minnesota Thunder’s Mukwelle Akale played a nice 1-2 before Akale’s shot was tipped over the bar by the red-hot Herrera. Herrera then stopped a hard shot from Lindley before a breakaway effort by the speedy Kunateh was sent just wide with the goalkeeper rushing out to harry him.

With all the pressure it was mounting however, Team Five had to score, and the lightning-quick Akale finally did it after being played through with a great through ball from deep by Langley. The same combination struck minutes later, with Langley this time farther up field before playing a good short pass that set Akale in on the doorstep of goal from where he made it 2-0.

What Akale provide in the way of a constant threat in the 1st half was matched for part of the 2nd by Team Six midfielder Amir Bashti of Northern California side DeAnza Force. Perhaps the smallest player on the field, Bashti made a big impact with a pair of goals in quick succession. First he reached the rebound of a saved shot from LAFC Chelsea’s Billy Abdallah. Team Five went up 3-1 almost immediately on a good finish from a sharp angle by Christopher Gomez of Philadelphia SC. Gomez showed a good soccer brain throughout his shift Wednesday.

Then Bashti scored again, making a great off-the-ball run to ghost in from the right and turn a cross from Caleb Moore into the back of the net and make it 3-2.

Boca United’s Aaron Kleinert put in some good tackles for Team Six, while Oakwood SC’s Brendan Constantine was a very effective marker for his team in the 2nd half, along with demonstrating good closing speed in the back line. Team Five’s Benjamin Swanson of Columbus Crew Juniors had good feet and good ideas in central midfield.

The diminutive but lightning-quick Bashti had one more contribution to make to the match, serving in a great free kick in the closing minutes that Billy Abdallah met with a header that scored to make the match score 3-3.

Region One 4, Region Four 2
The Easterners won behind a pair of goals from Malcolm Dixon (NJ Rangers) and one each from Ben Zieff (Nantucket Student SA) and Jeremy Ebobisse-Ebolo (Olney Rangers). Amirgy Pineda (Fullerton Rangers) continued his hot goal-scoring pace with two more for the Western side.

(That 3 goalscorers in this game were from clubs named Rangers shows once again that Rangers, and not Celtic are the best club in Scotland – editorial comment).

Region Three 6, Region Two 0
Atletico Santa Rosa’s Cesar Farias scored a first half goal for the Southeastern side, and then the squad knocked in five more tallies in the 2nd, including two goals by Jacob Hernandez of Solar SC and one each from John Skahan (Tennessee Rush), Nathanel Rennhack (Solar SC), and Tobin Howell (FC Sarasota). Austen Parker of Edmond OFC kept a clean sheet in goal.