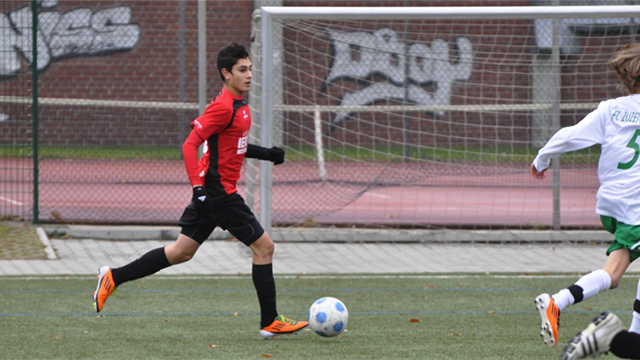 Christian Albelo was just kicking a soccer ball on a futsal court - a simple action that millions of kids around the world do, but he was all alone.

In a country where he did not speak a word of the native language, Albelo was an outsider . . . but it was also where he found his comfort zone.

With two parents in the military, Albelo had moved around in the past. But last year, his mother, Sandra, received a job offer for a prominent position. The only problem, the family would need to move to Germany. 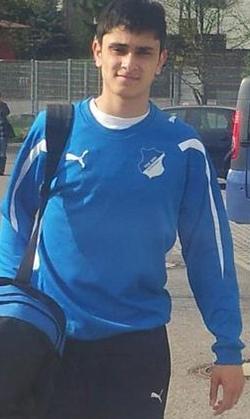 “We sat down as a family and decided that it was great for career advancement, and for Christian’s development,” Francisco Albelo, Christian’s father, told TopDrawerSoccer.com. “I can say it has been the best assignment in the almost 20 years of our Army career.”

Sandra headed to Germany first in early 2011. Francisco stayed behind so Christian could finish classes and attend the Region III ODP Camp.

“Unfortunately, he suffered an injury two weeks before camp that changed everything,” Francis said.

With Christian unable to play, he did not get the chance to showcase his talent in front of national team scouts.

“It was hard for him; he felt that it was his year.”

The injury to his wrist would be a major setback for the midfielder, as it required two surgeries to repair and kept him off the fields in Germany for an extended period.

“We arrived to Germany in July after having my second wrist surgery and I felt that I needed to get back to the field and at least have some touches on the ball while awaiting medical clearance,” Christian told TopDrawerSoccer.com. “My dad and I decided to walk to our local club (TSV Amicitia Viernheim) and use their futsal court.”

It was there that Christian caught the eye of the coaches at the tiny club, but the language barrier kept them from approaching the 14-year-old.

“In a conversation with our landlord about soccer he offered to talk to the TSV Amicitia Viernheim president to see if I could train to get back my fitness since they were doing their pre-season,” Christian added. “Once medically cleared, I felt comfortable with staying with Amicitia since they offered to help and the coaches were very pleased with my decision and performance.”

Playing up an age with the U15 team, he scored “23 goals in all competitions, 17 goals in league play and [contributed] 17 assists” while playing attacking center midfield. He leads the team in scoring, which is currently in first place of its league.

“Starting at a small club gave him the chance to get back in the field quicker and provided the spark for him to gain his confidence and fitness back,” Francisco said.

He will not be at a small club for much longer though.

With all of his success on the field, there were multiple clubs that wanted the American in their youth academy.

“During my second game in the country, I was lucky enough to catch the attention of the TSG 1899 Hoffenhein head scout for the region,” Christian said. “Third game, the Hoffenheim scout was present again sitting in the stands watching the game and taking notes during the game.”

The interest from the Bundesliga club only intensified as time progressed, and eventually Hoffenheim got their man.

“The sixth game of the season happened to be in Hoffenheim,” Christian said. “There were several scouts taking notes in the crowd at the game.”

Following the game, a scout and the TSG 1899 Hoffenheim Youth Director approached Christian and his parents about coming to a couple of training sessions with the U14 team.

There are still a few days left for Christian at TSV Amicitia Viernheim before he formally switches clubs at the end of May.

Hoffenheim is the future for the midfielder, but his past is intertwined with small fields and futsal courts.

“Christian started like any other American kid practicing other sports,” Francisco said about his son’s love for the sport. “One day, while staying with his grandparents during the time we both were deployed, he told my father that baseball was boring.”

Francisco’s father is from Puerto Rico, where baseball is king, but there is no denying a grandchild.

Soon, Christian was off playing at the local park with Barcelona Soccer Academy of Central Florida.

“There Christian and a group of 40 kids not only learned the basics for every position in the field, but they were taught the history of the game. It was refreshing [that the coach] had a notepad that he used to take notes every training session.”

By seven-years-old, Christian was hooked on soccer.

It was not until he turned 11 that futsal became part of his life.

“The inspiration to play futsal came from Amilcar Castro who I would train with everyday back in Clarksville, Tennessee,” Christian said. “We would do all kinds of conditioning for about an hour and then we would spend the last hour and a half or so playing futsal.

“To this day, I thank him for introducing me to futsal because it opened up a whole new side of the game that I never really thought to explore. It has really made me better as a player.”

From his start at the park and futsal courts, Christian has climbed to the level of Hoffenheim where he will join the ranks of U.S. youth internationals Joseph Gyau and Russell Canouse.

Christian has yet to receive a look with the U14 Boys National Team, but he is hopeful that one day he will get the call.

“I look forward to the opportunity to get an invitation to a National Camp, it would be an honor to be called up and represent my country. The country that my parents proudly serve.”

Fortune tends to favor the bold, and you will not find many clubs quite as bold as Joga SC.

The club with only 170 players has made waves for a number of reasons, but perhaps most famously is the way the club showcases its players.

The reason behind the names – Joga SC is trying to stand out.

“Every one is so cookie cutter,” club president Kephern Fuller told TopDrawerSoccer.com.

Fuller is not a brash man blowing smoke into the wind.

His club stands out in pretty much every facet for the right reasons.

The rules in Netherlands make it costly to sign international players, which ruled out Fuller from joining the club but made him realize technical players who did not have the athletic makeup for MLS could have a shot elsewhere.

So he started his own youth club taken from the inspiration of seeing kids play on the streets [specifically on basketball courts] in the Netherlands.

“We try to do the hip hop style,” Fuller said. “We want the players to be themselves – I kind of impress that on the kids. The street soccer helps with that.”

With music blaring and players hollering, it was an unusual site for many kids and parents to see on the blacktop.

“In the beginning – what is this? This is different,” Fuller said about the initial feedback. “[But] everyone could tell our players were different at the recreation league games.”

He said there has been no difficulty for his players in taking the success on the asphalt to the grass. And seeing his players on the grass against other local teams has raised the eyebrows of some.

“As soon as you find out someone is different, you inquire about it. It is a movement and culture we are trying to start - a love, passion, style, and flavor.”

Fuller sounds like a laid-back streetball announcer when he describes his players with his casual use of ‘shakes’ and ‘broken ankles,’ but he is more determined than most in trying to make his club more than just the average youth soccer club in the U.S.

“In 2013, we are going to start an amateur club in the Netherlands,” Fuller said. “Joga SC [in the Netherlands] will have a first team and a youth academy. Give more American players a chance to be seen.”

With the KNVB [the national federation for the Netherlands] paperwork already under way, Fuller is headed to a new frontier for youth clubs in the U.S.

Previously, clubs have established partnerships and affiliations with renowned international clubs, but starting a new club is definitely different.

“We would bring our best talent over, and give players a chance to play in our academy and then move up.”

If he is nervous about it, he certainly does not sound like it. His composure makes it seem like just an average idea.

Perhaps, his connections in Netherlands have helped alleviate his fears. He has been taking teams over there for the past ten years and built relationships with a number of clubs.

Now, he has players regularly asking him to help get them to Europe. He recently assisted D.C. United U16 midfielder Christian Rodriguez in landing a trial with FC Groningen’s Academy. Rodriguez is still training with the club.

“Help one player and everyone is asking about it,” Fuller said. “It is kind of blowing up.”