Pro Prospects: Another American at Molde Add another American to the ranks at Norwegian club Molde FK.

Former Chivas USA Academy forward Ben Spencer put pen to paper on a four-year contract in March, making him the latest U.S. native to join the two-time champions of the Tippeligaen. 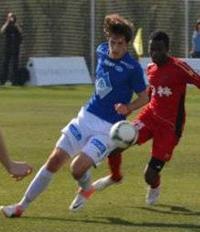 “It's an amazing feeling,” Spencer wrote TopDrawerSoccer.com in an email about signing his contract. “It's something I've been dreaming about since I started playing. I'm very excited to start my career with Molde.”

Spencer is one of three Americans on the books at the club – midfielder Joshua Gatt, who has slowly risen into a contributing role over the past few seasons, and defender Sean Cunningham, who has spent part of his career on loan away from the outfit. U.S. U18 Men’s National Team goalkeeper Ethan Horvath, while not officially a part of the club, has trained there intermittently over the last several months.

That of course, helps a young teenager make an adjustment to both living abroad and in a foreign country, although hearing English isn’t uncommon on the training ground.

“It's been nice seeing some other Americans around the club,” Spencer said. “It is sort of like a small taste of home. All of the players and staff speak English fluently though so I feel very comfortable speaking with anyone in the club and anyone in the city for that matter.”

First team minutes are probably a bit far off for the U.S. U18 MNT forward, but he already has a positive impression of his new league and surroundings.

“I think the Tippeligaen is quite good,” he said. “I haven't seen all of the teams play yet but from what I've seen and from the preseason matches I've played in it seems very competitive. I think many of the teams try to play good football, especially Molde. The football culture surrounding the club is fantastic. The city really cares for their club and supports whole-heartedly.”

Then, of course, there is the opportunity for Spencer to work under Molde FK’s manager, Ole Gunnar Solskjær. The former Manchester United forward, whose pro career took off at Molde, guided his former club to its last two championship and he has already made an impression on the former Chivas USA Academy standout.

“He is a fantastic coach and person,” Spencer said. “I am taking in everything he tells me. It's great working with such a world class striker.”

After first making a positive impression at the club back while on trial in December 2012 Spencer eventually navigated through a long waiting process, as he couldn’t sign a professional deal in Europe until he turned 18, as he did back on March 28.

And while he’s adjusting to the higher level of play and to the rigors of a professional career, the setting and climate is also new to him after growing up in the warmer, temperate Southwestern United States.

That part hasn’t been too much of a problem, however.

“Norway is a beautiful place,” he said. “It's quite cold and snowy compared to what I'm used to but I'm enjoying it a lot.”