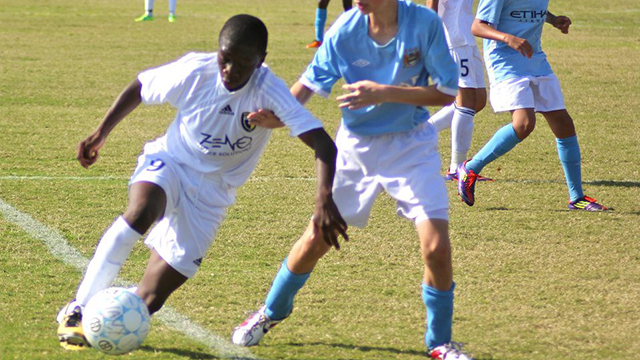 It all started with a YouTube video, but it very well could end up with Raheem Taylor-Parkes becoming a YouTube sensation.

Taylor-Parkes, a 14-year-old forward from Brandon FC [Florida], had a whirlwind last few weeks, which included a trip across the Atlantic for a trial with Arsenal FC’s youth academy.

Now, the London club is inquiring about his long-term services.

His path to England began last year with a highlight video posted online. The film caught the eye of a scout at Pro-Goals Sports (PGS), a management firm for athletes.

“We first saw Raheem in a few online videos in the latter part of 2011,” a PGS spokesperson told TopDrawerSoccer.com. “Then, PGS scouts saw him play games for his club team in January and February of this year.”

Impressed by Raheem-Parkes’ “pace and technical ability,” PGS’ managing director Romel Wallen used connections in Europe to setup up a weeklong tryout for the youngster with the Gunners.

The U.S. U14 Boys National Team member seized the chance, and made the most of his time in England.

“The experience was amazing,” Taylor-Parkes told TopDrawerSoccer.com. “The level of play was very fast – one and two touch – and very technical which is the Arsenal style of play.”

Wallen said that the speedy attacker made a good impression at the world-famous youth academy. 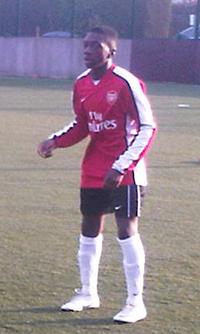 “Raheem has done very well for himself at Arsenal,” Wallen told TopDrawerSoccer.com over email. “He has proven to the technical staff that he can play among their best U15 players, and even standout in certain areas.

“His pace and general enthusiasm are his biggest assets, and all parties agree that a young player with Raheem's natural ability would benefit tremendously from early exposure to the elite European environment.”

The U.S. youth international is obviously thrilled with the prospect and the feedback he received from the club’s coaches.

“The technical staff said they liked my technical ability, speed, and aptitude to learn from the coaches,” Taylor-Parkes said. “Arsenal and Pro-Goals Sports are trying to work out a deal to keep me there on a permanent basis.”

Given the tricky nature of underage players joining international clubs, there are a few hurdles in the way for Taylor-Parkes, but PGS is well-versed in such areas and believes there is an opportunity for the youngster to join the English club.

“There are realistic avenues being explored that could allow Raheem to stay in the UK on a permanent basis, and thus play with Arsenal,” a spokesperson from PGS said. “Although it will be a challenge, PGS is confident that we can make Raheem's permanent move to England a reality.”

Raheem’s mother, Jennifer Taylor, told TopDrawerSoccer.com that she is open to relocating if her son was invited to join Arsenal’s youth academy.

“Since he was very young, he has wanted to be a soccer player,” Taylor told TopDrawerSoccer.com. “He gets in trouble at school for looking up soccer news and videos all day.”

Taylor is originally a track and field athlete from Jamaica. Raheem’s father is from the U.S. Neither played soccer growing up.

Raheem was born in Canada, but moved to Tampa by age 10.

Taylor also revealed that PGS is meeting with the family on Wednesday to discuss the next step for the young star.

The path to professional soccer is rarely linear. For Eric Fabre, a 17-year-old American currently living in Paris, the course has already taken several turns, and he has yet to even reach the goal.

The defender from Southern California, along with his family, moved to France in early 2009, as his childhood club West Coast FC was making a run at the USYS U14 National Championship.

After only being in France for a few weeks, Fabre returned to the States to help his club capture the title, and then he headed back to Paris for the start of a new adventure – with Paris Saint Germain.

“My try out with PSG was actually a stroke of luck,” Fabre told TopDrawerSoccer.com. “My parents were looking at a tennis club for my younger brother, Ryan. My dad was speaking with the secretary at the club when she mentioned that her father was President of the youth section at PSG.”

Fabre made the cut at the tryouts and has put in his time with the French club’s academy for the past three years. Currently, Fabre is a member of PSG’s U19 second team.

“I am actually on the second team for the U19 age group, so there is the Academy team above us that would be the team that takes players to straight to the pros,” Fabre said. “This means that we do not sign contracts per se, yet when we commit to the club, we commit for the year.”

This is Fabre’s last season with PSG though, as he will be attending Stanford in the fall.

“I got in touch with Stanford last year at about this time,” he said. “I sent an email directly to the head coach, who was Bret Simon at the time, and also signed up for their ID camp which was that July. “They were of course interested to see me play knowing my soccer background and history with PSG. I only met the coaches once at the camp, but after those four days I seemed to have impressed them.”

Like his PSG club mate, Piakai Henkel, Fabre has yet to receive a look from U.S. Soccer for any youth national team despite spending a few years with the French club’s youth team.

The defender, who says his technical abilities are the best part of his game, has professional ambitions following his time in Palo Alto.

U.S. U20 midfielder Marc Pelosi returns to action with Liverpool

Three months after suffering an MCL strain, Marc Pelosi returned to the game day roster for Liverpool on Monday. The left-footed midfielder made the squad for a friendly between Liverpool’s reserves and academy players and Limerick FC, a club in the first division of League of Ireland.

The game ended in a 1-1 draw. Pelosi was an unused substitute.